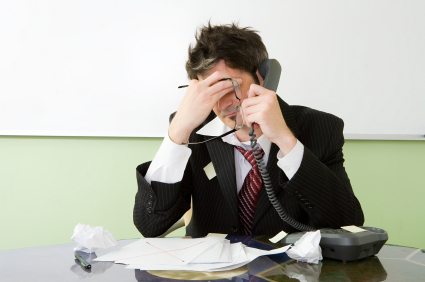 How about when you ring those people back, the people you were trying to get a buying decision from? The people who needed to “run your proposal past a few people?” Or maybe the people you were trying to get an appointment with? Very often they either still haven’t made a decision, they give another fob-off, or even worse – you can’t seem to get hold of those people ever again! Has this ever happened to you?

So Why Do They Do It?

There various reasons for this. Sometimes, there’s a genuine reason why they can’t proceed with the order – perhaps a colleague is away that needs to be involved, perhaps even that the person is so focused on delivering existing projects, they just can’t even think about another one!

However as mentioned above – in a number of cases, decision makers use objections as a convenient way of getting salespeople and business owners to leave them alone, and they keep using them because they work! Far too many salespeople and business owners fall for these objections, take the decision makers at their word – only to be surprised when they can’t get hold of that person.

The challenge is – unless you learn to do something, you’re going to suffer the same problems year after year, after year! If you’d like to do something to tackle it now, here are some ideas for you….

Tip Number 1 – Prepare To Tackle Them

You know you’re going to start getting these sorts of objections so why not consider how you’re going to deal with them and practice your responses? This means working out your objection handles, then practicing them with friends, colleagues or even in meetings with the rest of the sales team. The better prepared you are for when the objections come up, the better you’ll deal with them.

Tip Number 2 – Think About What They Really Mean

Might some people use the objection when actually what they really mean is “go away?” Or perhaps “it’s not important enough for me to look at right now?” As someone who originally trained as a professional buyer, I can guarantee you that’s the case.

Here’s a quick distinction – the more new business your telephone call or appointment is, the less rapport you have – therefore the likelihood of them ‘fobbing you off’ is much higher. If you’re with an existing client you have personally a very good relationship with, it’s more likely that they’re telling the truth.

Before the end of this conversation or meeting you need to ask some more questions to get the information you need!

If the decision maker doesn’t appear to give specific reasons for the delay, they don’t seem as interested/motivated as they were, or they seem to want to get rid of you as fast as possible, that’s a pretty big sign they’re trying to fob you off.

Tip Number 4 – Have The Right Attitude

The attitude of the salesperson or business owner is also vital in getting the results that you want here. If you pick up the phone or walk into a meeting expecting the other person to say ‘call me back after Easter’ then guess what you’re probably going to get in most cases?

If you’re in a competitive market you can bet that the buyer or decision maker is talking to other suppliers and all it takes is for the salesperson at one of those companies to be better at dealing with the objections than you are.

Now that you’re aware that’s often the case, you’re not going to let that happen to you in future, are you?