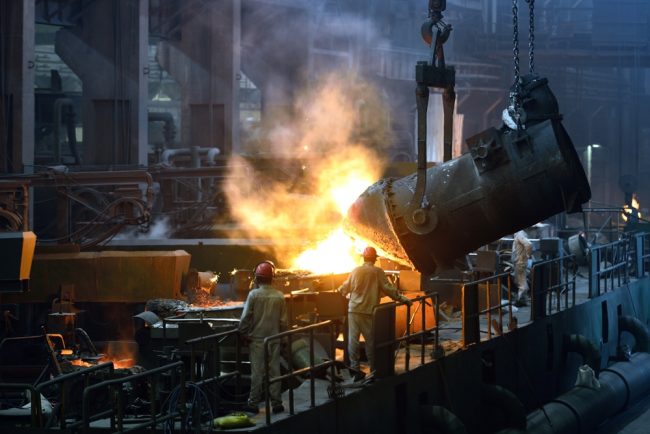 Worldwide production of steel rose 1.4 per cent year-on-year in July – the first increase since January 2015 – but output from Britain’s embattled steel sector plunged, highlighting the continuing pressure it is under, reports The Telegraph.

Data from the World Steel Association showed that the UK’s ailing steel sector suffered a fall in production of 27.3 per cent in July compared with the same month a year ago.

The dire figures are a heavy blow for the sector, especially in the wake of Tata’s giant Port Talbot plant in south Wales managing to make a £5m profit in June, helped by a rise in global steel prices and the pound’s post-referendum decline.

The global increase has come as China, Russia and India pump up production, outweighing falls in other regions, such as Europe, where it declined 4.6 per cent in July, the US, off 0.4 per cent, and South America, down 9.7 per cent.

In a note, analysts at Barclays warned that the industry’s “fundamentals remain muted, with lacklustre demand indicators” and noted there is still massive overcapacity in the sector, with utilisation at just 68 per cent, though total output was almost 132m tonnes in July.

“Improved momentum on anti-dumping continued to fuel expectations in Europe, but increasing imports into the US – July was a 13-month peak – raise questions of the sustainability of a positive impact from trade protection measures,” said analyst Vladimir Sergievskiy. “We continue to see downside risks to spot prices into the year-end.”

European steelmakers – and those in Britain particularly – are under intense pressure as they compete against rivals in China, India and Russia who are able to turn out steel at a lower cost, as they do not face high environmental levies and energy prices.

The strength of the euro – and until recently, sterling – also made Europe an attractive market for exporters, with foreign producers flooding the region with cheap steel, often from state-backed plants.

The EU has been relatively slow to act introducing anti-dumping measures, factors which have all combined to bring Britain’s steel industry to its knees.

In the past 18 months, more than 5,000  steel jobs have been lost, with major events including the collapse of SSI in Redcar, Caparo going into administration, and Tata putting its UK operations on the block.

Leaders from the UK steel industry have been calling for relief from the Government in the form of rebates on green levies, tax breaks to encourage capital investment and a procurement strategy that encourages buying British made steel.

Gareth Stace, director of trade body UK Steel, said: “These figures show that for the UK and Europe, the steel crisis is still with us and swift and decisive government action is just as vital as it ever was.

“Theresa May’s new administration is signalling a willingness to think differently on economic policy as the country faces uncertainty over Brexit. She has within her gift the ability to address policies which continue to drag down steel made in Britain, including energy prices, which are still much higher than our competitors face, and business rate rules which discourage investment in new and modern machinery.”