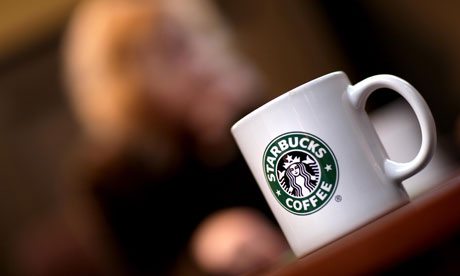 Starbucks has had sales of £3bn cumulatively since setting up operations in the UK 14 years ago. But with nearly 800 stores across the country, it is still making a loss. How come? Here, your burning Starbucks/tax questions are answered …

Why so little? With more than 750 coffee shops in the UK, any profit is wiped out through a number of payments which Starbucks must make to subsidiaries abroad.

Such as? A 4.7% premium is paid to the Dutch division of Starbucks – the regional headquarters – for rights images and the coffee recipes. The premium, which used to be 6% before Her Majesty’s Revenue & Customs (HMRC) asked for it to be lowered, also includes the cost of the roasting process that takes place there.

Where does it buy the coffee beans? From the company’s Swiss operation at up to a 20% premium. The Lausanne-based business, which employs 30 people, buys around $1bn of coffee, making around $200m from the mark-up it charges the UK business. It pays a tax rate in Switzerland of around 5%. The company says it pays higher prices because it only buys premium coffee beans.

Why does the UK operation pay a premium? The stores are not franchises, however HMRC allows companies to pay intellectual property fees to overseas parent companies if they are made at “arm’s length”. Starbucks can charge the premium if it can show that it would have agreed on the terms between the parent company and UK company even if they were not connected.

Do other businesses charge a premium? Yes. McDonald’s and Burger King charge premiums of up to 5% of turnover, while Wal-Mart charges UK subsidiary, Asda, 0.6% for services including royalties. However, all three make a profit in the UK and pay subsequent taxes.

Any other reasons for Starbucks’s low tax bill? Yes. The company spends $500m (£315m) annually on tax-deductible areas including research and development. The company also claims the rental rates on its stores in the UK are some of the highest in the world, especially in central London where some stores have already been closed because of the cost. Bosses also say they spend more on store layout and design than competitors.

Starbucks also paid other group companies for unspecified services, including an unknown Swiss-based associate. The Europe, Middle East and Asia division, which oversees the UK operation, also loans cash for investment, which it then charges interest on. This can be written off against tax.