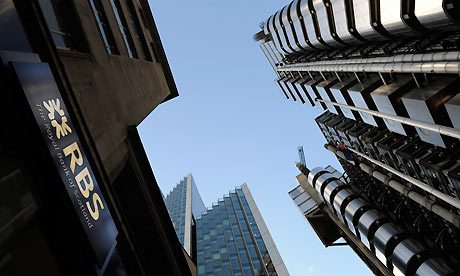 Global banks could face downgrades to their credit ratings as a result of the Libor scandal, the ratings agency Moody’s warned on Tuesday as it emerged that the US department of justice had been in touch with traders at Royal Bank of Scotland, reports The Guardian.

Moody’s said it was more concerned about the litigation risk posed by the ongoing investigations into attempts to manipulate the benchmark rate than any fines that banks might face.

Stephen Hester, the chief executive of RBS, last week said the bailed out bank was preparing to enter talks to settle regulators’ claims that some of its traders were involved in Libor rigging but was unable to say if the fine would be larger than the £290m slapped on Barclays in June by regulators in the UK and the US.

The lingering risks from the Libor cases were raised by Moody’s amid fresh signs that the US authorities were continuing their investigations. The US department of justice has approached traders at RBS during its criminal investigation into Libor.

The Serious Fraud Office said last week it expected “significant developments in the near future” in its own Libor investigation, remarks that could signal investigators are preparing to make arrests of those involved at a handful of banks across the City.

The analysis by Moody’s lists a number of banks that have disclosed they are co-operating with regulators’ requests for information, including Lloyds Banking Group, RBS, HSBC, UBS, Deutsche Bank, JP Morgan Chase and Citigroup.

While Barclays is the only bank to have been fined, Moody’s pointed out that in December 2011 UBS and Citigroup were ordered by Japan’s Financial Services Agency to suspend their derivatives trading in Libor and its Japanese equivalent, Tibor Japan, for one and two weeks respectively. Other fines are likely to be “absorbable” by each bank’s annual earnings, Moody’s said.

But the agency added: “Compared to regulatory investigations, we see litigation risk, particularly in the US, as posing greater credit risk for both US and non-US panel banks. This is based on our view that successful litigation, especially if it involves a class action, could result in awards to plaintiffs that are significantly larger than the likely regulatory fines.”

Moody’s said more than 20 Libor-fixing cases were pending before Judge Naomi Buchwald in the Southern District of New York. In the UK no legal claims have yet been brought arising solely out of the alleged Libor fixing, Moody’s said, although the case brought by Guardian Care Homes about mis-selling of interest rate swaps is focusing on the way interest rates were fixed. “Moody’s will monitor this case closely to see how the Libor-fixing allegations are handled in the context of the mis-selling allegations, which rely on other aspects of the suitability of the products for the investor,” the ratings agency said.