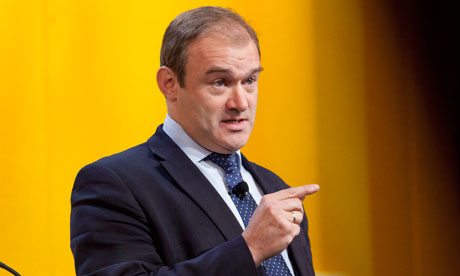 The energy secretary, Ed Davey, has warned that energy firms could face swingeing fines and be forced to pay customers back through lower energy prices as the gas-trading scandal escalated with more whistleblowers coming forward and claims that the electricity market could have been rigged too.

Davey pledged the government would “support the regulators taking whatever steps necessary to ensure the full force of the law is applied” if it is found that prices have been deliberately distorted, reports The Guardian.

The row could spread to Europe on Wednesday as the whistleblower and gas price reporter at the centre of the row, Seth Freedman, meets senior EU officials to explain his concerns.

The Guardian revealed on Monday that Freedman had taken a dossier of data and documents allegedly showing price manipulation in the wholesale gas market to the Financial Services Authority.

Both the FSA and the energy regulator, Ofgem, which was separately approached by Freedman’s employer ICIS Heren, at his request, have now launched investigations.

On Tuesday more industry insiders came forward to express their concerns. Tim Fettis, who had acted as an electricity market price setter at ICIS Heren, said he had left the company after a couple of months because he felt uncomfortable about taking on such a responsible job with little training.

“The current energy system is open for manipulation, there’s no doubt – not just in gas, but in electricity, also because the market is so illiquid [low trading volumes],” he added.

Meanwhile, a former energy trader has made similar allegations about the electricity and gas markets to ITV News. Omar Rahim said: “Most traders know that this is going on. A simple example would be electricity is trading at £50 all day and at five to five before the market closes it suddenly trades at £52. Now it immediately looks odd. It’s not traded at £52 all day and right before the market’s closed you see a spike up in the market.”

Nick Grealy, an energy consultant who publishes the No Hot Air website but formerly worked for EDF Energy, said unexplained gas price movements were a “continual source of amusement and cynicism” among those working in the wholesale markets. “They [traders from non-EDF companies] would also openly manipulate the market via the price reporting agencies,” added Grealy, who also used to buy power for the National Health Service.

Jason Torquato, who also worked at ICIS Heren as a gas-price setter, said he was certain any manipulation of indices created by the price-reporting agencies could “influence retail gas prices”.

He said he had noted “half a dozen or a dozen” occasions that price differentials over the course of a year looked unusual, with one particularly marked case on 9 September 2011.

Davey, who was broadly aware of the allegations since Friday, has been determined to be seen to act, and given the scale of voter anger at energy prices, to avoid any whiff of complacency.

During his statement there were widespread calls from all parties for action to protect energy consumers, as well as concern that other areas, including food prices, might also be open to abuse. Tory MPs called for the book to be thrown at whoever was responsible.

Davey insisted he did not want to prejudge the inquiries launched in the wake of the allegations, adding that the investigations were at an early stage, but he said they could involve either civil or criminal offences. If certain offences, including cartel offences, are proved to be committed there are very serious potential penalties. Fines can be up to 10% of a company’s worldwide turnover.

He called on other whistleblowers to come forward, saying the government had powers to protect their anonymity.

Davey said he was willing to hand the regulators further powers, adding that the UK had taken the lead in developing the EU’s regulation wholesale energy market integrity, legislation that will come into force in the UK shortly. The directive strengthens regulators’ powers to tackle market abuse.

The minister said it was not clear if the Guardian’s allegations related to physical or financial markets, with the energy regulator Ofgem responsible for the former and the FSA the lead body for the latter. He added that the Office of Fair Trading also stood ready to intervene if necessary.

The shadow energy secretary, Caroline Flint, responded by claiming there were deep structural problems in the energy market and its regulation. She said: “Energy companies have been able to run their businesses in such a complicated way it is not possible to know the true cost of energy. Most energy is bought and sold through secret back-room deals and energy companies are allowed to generate power, buy it for themselves and sell it on to the public.”

She said it was time to force companies to sell the electricity they generated into an open pool so that anyone could purchase to retail to the public, so increasing transparency and competition.

She also again called for a new regulator to replace Ofgem, but Davey rejected the proposal, saying a massive reorganisation would not speed up the investigation. An open pool would not tackle the problem of liquidity, he added.

Pat McFadden, a former business minister, said it would reflect badly if it was possible to tackle the Libor scandal but not possible to do the same for other markets, including food, due to a lack of international powers.

Frank Dobson, a former energy minister, said the electricity market had become a speculators’ racket designed to manipulate the market.

The concern about market manipulation was equally strongly expressed on both sides of the Commons, as MPs said voters were increasingly angry at the way in which they were being ripped off by the energy companies.

Patrick Heren, who established the price-reporting agency now known as ICIS Heren and ran the business for 15 years before selling it, said it was inevitable that traders tried to “game” the system.

Rather than criticise price reporters, he said, they should be defended for getting close to a near approximation of the real price. “The market price [as given by ICIS and others] reflects the market fundamentals, although you can get little tweaks,” he explained.

It was the job of a good price reporter to take all gyrations into account. “Obviously the thing about reporting the market is that you regard the whole lot as a pack of liars, well not liars, but everyone is defending a position. Most tell the truth, but not the whole truth.”

It’s important to stress that the wholesale gas market has more than 50 participants, not just energy supply companies, handling hundreds of trades every day. It is in everyone’s interests that there is a well-functioning and orderly wholesale energy market.”