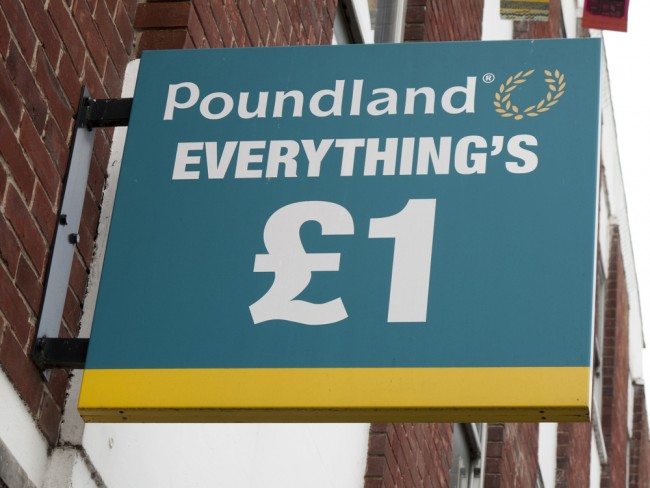 Poundland, which has built a near-£900m business from selling goods with a single price tag of £1, has started an online shopping service in a bid to deepen its appeal to bargain-conscious shoppers – with a delivery charge of £4.

Launched on Tuesday, the website sells more than 2,000 items across Poundland’s traditional range of food and drink, homeware, toys and stationery.

As well as branded goods, such as Kellogg’s cereals, Heinz sauces and Fray Bentos pies, shoppers will be able to buy Poundland’s own-range products, including kitchen utensils sold under the name of the celebrity cake-maker Jane Asher and DIY goods promoted by the TV builder Tommy Walsh.

The Guardian reports that the delivery charge will be waived for customers spending more than £50. There is no minimum order. It will also take up to five working days for a delivery to arrive, and at present there is no option to upgrade to a faster delivery service.

Nor is Poundland allowing customers to collect orders from its stores – the “click and collect” option increasingly popular with shoppers – as companies clamp down on personal deliveries at work.

The service is currently only available in the UK.

Poundland’s chief executive, Jim McCarthy, said: “The online shopping market is a rapidly growing channel and one which could provide a significant potential opportunity for us. This trial is an important first step towards giving more customers access to our amazing value.”

Poundland is the latest discount retailer to move into online shopping, after its rival Poundworld launched a website selling around 4,000 products in April.

George Scott, a senior consultant at the retail analyst Conlumino, said Poundland’s online shopping service could be a game-changing move.

“It is is still very early days,” he said. “They could steal a march on the supermarkets in the food market … The discount space [online] is not very competitive at the moment.”

The launch comes after competition authorities gave the green light last month to Poundland’s £55m takeover of its rival 99p Stores. The Competition and Markets Authority ruled that competition would not be damaged if Poundland combined with 99p Stores to create an 800-shop discount retailer.

Poundland rang up sales of more than £1bn this year and aims to open 1,000 stores in the UK. The company also has 40 stores in Ireland and nine in Spain under the Dealz brand. Poundland opened its first store in in 1990, in Burton upon Trent. When its preliminary results were announced earlier this year, the company had 588 stores in the UK and Ireland.

Consumers’ love of a bargain has driven a boom in fixed-price retailers, but some are now questioning whether the era of rapid growth is over. Market researchers at the Local Data Company have identified six towns in the UK where pound stores have reached saturation, and Poundland revealed a decline in sales when it published its latest financial results.

The retailer has been developing its shopping website for more than three years and had hoped to launch before last Christmas, until McCarthy pulled the plug.

In an interview with the Guardian earlier this year, he said an earlier version was not “sufficiently attractive and easy for people”.

“When we do launch, I want them tweeting about it and sharing it with their friends.”

According to figures from the Office for National Statistics (ONS), 76 per cent of adults across Britain have bought goods or services online in 2015, up from 53 per cent in 2008. Clothing and sports goods are the most popular online purchases.

Poundland shares were changing hands at 345p on Tuesday, a fraction down on the day, but they remain almost 9% higher than a year ago.