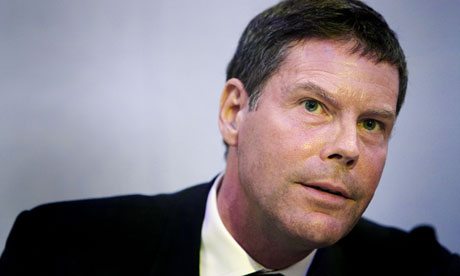 Hector Sants, the former chief executive of the Financial Services Authority, is in talks to join embattled Barclays in a senior role barely six months after the leaving the City regulator, reports The Guardian.

His six months’ gardening leave will have ended by the start of January, and Sants made clear when he left the FSA in June – just days before Barclays was hit with a record £290m fine for rigging Libor – that he was hoping to secure another senior role.

Sants is also being linked to other positions, including at the accountancy firm Deloitte, although as he was a banker before he joined the FSA in 2004 he may be more likely to be persuaded to join Barclays, which was thrown into turmoil by the Libor allegations. The chairman, Marcus Agius, the chief executive, Bob Diamond, and the newly promoted chief operating officer, Jerry del Missier, all quit in the wake of the regulatory reports, which showed traders offering bottles of Bollinger for fixing submissions to the Libor panel.

If Sants is appointed to a role at Barclays – most likely involving regulatory and compliance areas – it could prove controversial, because he was drawn into the Libor scandal and was at the helm of the regulator when Diamond was appointed chief executive of the bank two years ago.

Sir David Walker, also a former regulator, has already been parachuted in as chairman to replace Agius, while the head of the retail banking arm, Antony Jenkins, was promoted to chief executive and immediately began the process of attempting to bolster morale at the bank and improve its public image.

Sants is not thought to be in discussions about taking a seat in the boardroom but would be a senior figure inside the bank, which is also being investigated by the FSA for the disclosures it made at the time it secured funding from Middle Eastern investors during 2008, which helped it avoid a taxpayer bailout.

Even though he left the FSA before the bank was hit with the Libor fine, Sants has since given his version of events at a series of hearings by the Treasury select committee. In September Sants wrote to the committee to make clear that the regulator knew about the Libor investigation when it approved Diamond’s promotion to chief executive – and “reserved the right to reassess [his] suitability in the light of the conclusions reached by investigation”.

Sants is also said to have told Barclays that “the relationship with [Diamond] had not reached the level of openness, transparency and willingness to air issues” that the regulator had had with his predecessor.

He could not be reached for comment, while Barclays would not comment on the suggestion that talks were being held, following a story that was first aired by Sky News.

Sants’s surprise departure from the FSA was announced in March and came ahead of the breakup of the regulator, with some of its operations going to the Bank of England and others to a new consumer regulator.

The potential recruitment of Sants was mooted as Barclays completed a restructuring of its African operations by increasing its stake in its existing South African subsidiary Absa to 62% from 55% and bolt on some of its existing operations throughout the continent. Absa is effectively paying £1.3bn to Barclays, through issuing shares, to take on much of the British bank’s African operations, thereby creating a larger business spanning countries such as Botswana, Tanzania and Zambia.

Ian Gordon, a bank analyst at Investec, said: “Confirmation of the structure and pricing for its long-awaited African consolidation ticks all the boxes.”

Jenkins has adopted a strategy of developing Barclays into the go-to bank for customers, and used the slogan when announcing the African deal.

The bank said the transaction with Absa “is an important step in realising the shared goal to become the go-to bank in Africa, and is significant in aligning the integrated operating model across sub-Saharan Africa”