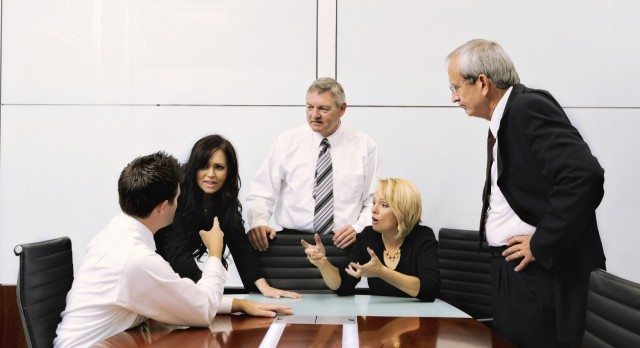 Most people have the wrong idea about conflict. There are two kinds. Constructive conflict is how highly effective teams reach the right decisions and develop successful action plans. The other kind destroys productivity, effectiveness and morale. It destroys companies. It’s called destructive conflict, but I bet you already knew that.

Just about anyone can learn how to disagree or debate in a positive way. But if you’ve got a knack for driving a bunch of smart, diverse, opinionated people to consensus on a heated topic, then I see leadership in your future. And if you can consistently lead those people to the right conclusion, then I bet you’ll be a successful leader, as well.

The rub, of course, is that we’re all people. And people have one thing in common that often puts as at odds with each other: different perspectives, needs, and wants.

Why can’t we all just get along? Because we can’t. That’s just not how people roll. But what we can do is engage in constructive conflict and come to agreement on important matters. Here are seven methods or phrases that will go a long way to diffusing the most heated debates and facilitate effective planning and decision-making.

Attack the problem, not the person. It’s okay to say, “I don’t like your plan and here’s why.” If that pisses people off, you can call them on it. Being too personally attached to your own ideas is a cardinal sin in business. But if you say, “I think you’re an idiot,” that’s on you. The distinction is huge.

“Let’s take a walk.” I don’t know why, but a little fresh air and blue sky always takes the edge off and helps you see the big picture. I once had a micromanaging CEO. We had these knock-down, drag-out meetings. They weren’t pleasant and never ended well. One day he showed up and said, “Let’s take a walk.” That changed everything. No kidding.

Put up a parking lot. If things get out of hand in a meeting and there doesn’t appear to be any end in sight, then get up, write the words “Parking Lot” on the white board, and park the issue there. Then agree to take it up some other time — presumably after everyone’s gotten a good night’s sleep, a few drinks, and hopefully a little perspective.

Put yourself in the other person’s shoes. There’s a specific way to put yourself in the shoes of your nemesis that works so well it’s uncanny. Just say, “Let me see if I have this right. You’re saying that we should…” and try to articulate his position back to him. Just hearing you literally state his viewpoint has a funny way of turning the tables and diffusing emotion. Try it. It’s one of the most effective methods for conflict resolution.

“Let’s take it offline.” One company founder had a cardinal rule for dealing with his cofounder and CEO: don’t debate him in public. Certain situations just bring out the dark side in some people. When that happens, agree to take it offline, meaning when others aren’t around. That’ll almost always help diffuse the situation.

Check your assumptions. One chief executive I know told me that most disagreements are due to conflicting assumptions. It’s hard to argue with that. I can’t tell you how many conflicts I’ve seen or debates I’ve been party to, only to find that they were really arguing about two entirely different things. Sometimes they were even saying the same thing, but in different ways.

If I had to summarize the underlying concept here, it’s this. When there’s a lot at stake, people who care about a business or its products will have strong opinions and, occasionally, strong emotional reactions to opposing views. To reach consensus, you have to diffuse the emotion, gain some perspective, and seek common ground.

If your team or company has consistent problems with this sort of thing, get someone to coach you on how to do it right. Dealing with conflict isn’t rocket science but it can be highly destructive.