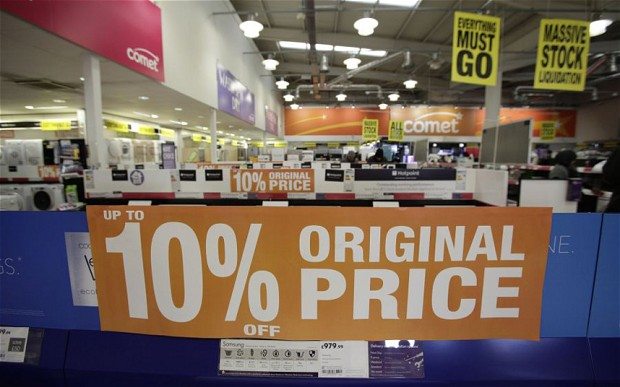 Electricals chain Comet will leave a scar on the high street as the remaining stores are closed, leaving landlords, suppliers, customers and the taxman facing losses of more than £230m, reports The Guardian.

Administrators Deloitte said the administration process would not raise enough money to pay back unsecured creditors who are due £232.9m. They rank behind priority creditors, such as the retailer’s owners, the private equity group OpCapita and its co-investors, who are owed £145m but stand to collect £50m.

Comet collapsed into administration in November and in the absence of a buyer Deloitte has been closing stores in batches. Its restructuring experts have closed 200 stores and said the remaining 45 stores would shut on Tuesday. The chain’s failure will see 6,900 jobs disappear.

Although hopes of finding a buyer for Cometwere considered slim at the outset, Deloitte said 118 parties initially expressed an interest in buying the whole or parts of the business. Four concrete offers received fell short of expectations or stumbled during due diligence, with potential purchasers put off by working capital requirements. Deloitte said it was still speaking to a “small number of parties” but talks are thought to centre on the sale of the brand name, with online retailer Appliances Direct the frontrunner.

OpCapita, run by former investment banker Henry Jackson, received a £50m dowry when it took over the running of the chain in February. Jackson and his investors structured the deal through a company called Hailey Acquisitions Limited (HAL) which also had the status of secured lender to Comet so was first in line to receive funds recouped from the administration.

Comet’s rapid descent into administration on OpCapita’s watch has raised eyebrows. It had been part of stock market-listed Kesa since 2003 when the group was spun out of B&Q owner Kingfisher. After three years of losses Kesa bosses lost patience, putting Comet up for sale in 2011 but eventually paying OpCapita to take it off its hands in February.

Nick Hood, a director at Company Watch, said OpCapita put very little of its own money at risk, behaving more like Comet’s banker than its owner. “They put in money not as fixed share capital but as loans,” he said. “I think there is a moral issue here. The owners of this business took no risks [with their own money] but transferred them to suppliers and the staff – and the staff risk has been transferred to the government which is paying for the redundancy costs.”

The taxman faces an unpaid bill of £26.2m in VAT and payroll taxes due to the administration while the government will also pick up the tab for the £23.2m of redundancy pay owed to employees.

OpCapita said its attempt to turn Comet round foundered as tough trading conditions in the retail sector were compounded by credit insurers refusing to cover suppliers. Without insurance, electrical suppliers sought payment up front or asked for a legal claim, called “retention of title”, so stock could be returned in the event of administration, a situation that put pressure on the retailer’s day to dayfinances.

Comet lost £31m in the five months before administration, the report said, which was on top of the £95.2m loss in the year to April 2012.