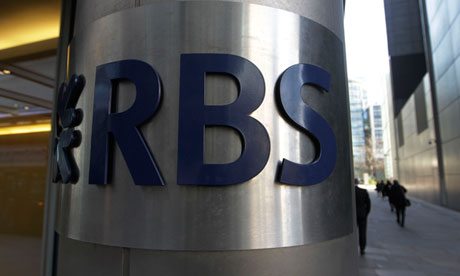 Royal Bank of Scotland is continuing to negotiate with the Financial Services Authority over the scale of its penalty for attempting to rig Libor, amid speculation that Swiss bank UBS is close to agreeing a £1bn fine with global regulators.

An announcement from RBS is expected in the coming weeks, as it settles with UK and overseas regulators on the manipulation of the key benchmark interest rate, reports The Guardian.

Stephen Hester, chief executive of RBS, in which the taxpayer owns a 82% stake, has already made clear that he expects the bank to face a large fine and that he wants an agreement to be reached by the time the bank reports its full year results in February.

RBS is thought to be continuing to exchange information with the FSA about the scale of its involvement in Libor amid reports from Switzerland that UBS will admit that 36 of its traders were manipulating the interest rate based on the yen. UBS is said to be prepared to admit to criminal wronging in its Japanese arm and that charges could be filed against a number of former UBS bankers.

A former UBS trader – Tom Hayes – was among three British men arrested last week in an investigation into Libor rigging by the Serious Fraud Office.

The potential UBS fine keeps rising. Last week the Swiss bank had been expected to pay £630m – more than double the £290m that Barclays paid to settle allegations that 14 of its traders were involved in manipulating Libor. The FSA fined Barclays a record £59.5m and US regulators fined the bank £230m and all its traders were granted anonymity in regulatory reports.

Estimates for the RBS fine are wide, ranging from £150m to £350m and even higher. Ian Gordon, analyst at Investec, had estimated the RBS fine could be £400m.

While the City awaits details of any further Libor fines, the parliamentary commission on banking standards, set up in the wake of rate-rigging scandal, is due to meet on Tuesday to discuss its recommendations for the implementation of the ringfencing proposals by the independent commission on banking.

The banking standards commission, chaired by Conservative MP Andrew Tyrie, had been asked to conduct pre-legislative scrutiny of the banking reform bill which is intended to set out the legislation requiring banks to ringfence their high street banking operations from investment banking arms by 2019.

During evidence taken by Tyrie and his commission members it has become apparent that they are considering whether the legislation should include a backstop that allows the government to demand banks are broken up completely if they do not erect a strict ringfence. When Sir John Vickers, the architect of the ringfence as chairman of the ICB, was asked whether full break-up should be kept in reserve, he said he could not “resist” the idea.

Its decision could be published around the same time that fresh evidence of the extent of Libor rigging is exposed in documents which are expected to be released with any UBS fine.

The regulatory reports into Barclays exposed for the first time the rigging of the key interest rate in the run-up to the 2008 financial crisis and highlighted concerns that during the crisis banks were inserting submissions into Libor that were deliberately too low in an effort to avoid any suggestion they were experiencing financial difficulty. Libor – which is now being reformed – required members to submit the price they expected to be charged by other banks to borrow over a number of time periods and in a number of currencies.

UBS has already had a major change of its top management in the wake of the jailing of Kweku Adoboli for incurring £1.5bn of trading losses, unlike Barclays whose chairman Marcus Agius, chief executive Bob Diamond and chief operating officer Jerry del Missier all quit in the days after the fine was announced in June.

The regulators published documents alongside the Barclays fine showing traders offering bottles of Bollinger for setting Libor and quips such as “done for you big boy”.

Court documents in Singapore have shown emails by former RBS traders quipping “hahaha” and describing Libor as a cartel. The documents have been filed as part of case brought by Tan Chi Min, a senior trader at Singapore who was sacked last year.

UBS was hit with a £30m fine by the FSA last month for the systems failures which allowed Adoboli to rack up the losses in the biggest fraud in UK history. It has also had a number of run-ins with US regulators and was served with a deferred prosecution agreement in 2009 on charges of helping customers avoid tax in the US.

The banks declined to comment as did the FSA.