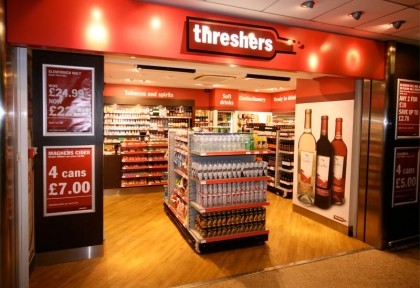 One franchise
said that some stores are receiving “on average only about 55 to 60 per
cent” of products ordered over the past two months, citing availability
problems with well-known brands including Bacardi and the New Zealand
wine Montana Sauvignon Blanc, although these can vary on a weekly
basis. Some of the out-of-stock problems relate to Threshers’ suppliers
having their cover scaled back by leading credit insurers.

The
revelation about product availability comes after First Quench – which
operates 1,400 Threshers, The Local and Wine Rack fascias – issued a
“going concern” warning, citing a “material uncertainty” that cast
significant doubt on its ability to continue trading, according to
accounts filed at Companies House earlier this month. For the period
from 16 May 2007 to 28 June 2008, the group made a pre-tax loss of
£30m.

A Threshers franchisee said: “Far and away the most
serious issue is that of stocks. Inquiries about missing products are
ignored. We are just told that it is ‘out of stock’ in the warehouse.”
The franchisee also cited “out-of-stocks” with Macallan malt whisky and
Lamb’s Navy Rum, adding: “We never know what is coming in from one week
to the next – yet they want us to increase turnover.”

Eyebrows
have been also been raised by the news that First Quench last month
served notice to terminate its five-year distribution contract with
Norbert Dentressangle, which was signed after the private equity firm
Vision Capital bought Thresher Wine Holdings in July 2007 for £95m. The
owner of Threshers intends to run the operation in-house, although it
is unclear when the French logistics company will stop supplying
Threshers.

A First Quench spokeswoman said that credit
insurance is a “a major issue impacting retailers across the country”,
but added that it had the full support of all its largest suppliers.
She added: “Whilst there have been some temporary out-of-stocks in the
supply chain we also recognise that franchisees are a key part of our
business.” First Quench currently has 83 franchisees with 95 franchised
stores, while the other stores are managed by the company itself.

Threshers’
franchisees are also angry at their “exorbitant” costs of doing
business. For instance, First Quench increased the delivery charge paid
by franchisees around July 2008, which means they now pay 86p for every
six bottles of wine delivered, up from 82p. Franchisees also have to
pay a management service fee – equal to 3 to 5 per cent of a store’s
sales – that is increased in line with inflation each year. “Some
franchisees, myself included, are in serious danger of bankruptcy if we
don’t get out soon,” one said. But the First Quench spokeswoman said it
had written to franchisees over the weekend offering them a reduction
in the management service fee for six months from 28 June.

Sir Philip Green’s family is to pay a promised £50m into their fashion empire’s pension scheme within the next 10 days – almost a year earlier than scheduled – as the business secretary, Alok Sharma, called on the insolvency watchdog to investigate the handling of the failed group.