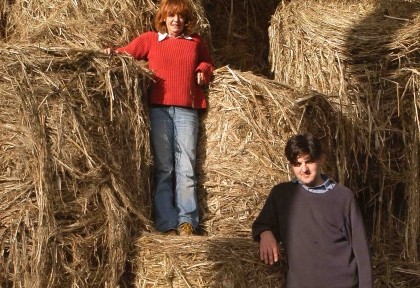 Henry Braham
Glynis, my wife, and I both work in the film industry but grew up on farms. We had a dream to embark on a project that would bring us back to our farming roots. We decided, after some thought, to grow hemp for fibre production but to cut a long story short, we became aware that the seed in the hemp that we weren’t using had incredibly nutritious and health properties and also tasted great. We looked at the market and saw there were plenty of hemp oils sold as nutritional supplements, but we felt they’d missed out on the most interesting thing – its fresh, nutty taste.

So in 1996, we started out on a journey of learning how to grow and produce a culinary hemp seed oil, feeling particularly enthusiastic about its
potential as a healthy oil. After all, here was an oil with half the saturated fat of olive oil and very rich in all the Omegas.

It took us years to learn how to produce really good quality oil from our farm in Devon. We made some terrible mistakes and just couldn’t seem to get it right. Another blow was that when we talked to people about our product, nobody understood it. Eventually, Waitrose got it. They’d already spotted a gap on their shelves for an oil with real added value. They gave us a try and in 2004 our oil was on their shelves. In 2005, we moved into Tesco and we’re in all the multiples now.

Meeting that demand wasn’t easy. We had to find a way of increasing production and that involved teaching other farmers in England how to grow the seed for us. It was only in 2006 that we were able to truly expand.

Glyn and I have been married for 10 years and together for 12. We’ve often worked together in the film industry during that time – me as a
cinematographer and she as a producer – and that’s always worked well. Sometimes this business doesn’t feel that different – in terms of the
process of decision making and developing ideas, which have to be open to rigorous scrutiny. Like a movie, we constantly find ourselves trying to improve the products and questioning whether our decisions are right or not.

In many ways, the business works in a similar way to our marriage, which is why I think it’s lasted so long. We have the same instincts about things and we have great respect for each other’s points of view. We never lose our temper, even when things get stressful. We listen to each other very carefully and find it easy to talk openly. We recently got an MD on board and it’s been interesting how smooth that process has been. We’re so used to being so open about everything with each other that when outside people come in, it feels natural to be the same with them.

Another thing that’s changed recently is that for me, at least, the business has shifted from being part-time to full-time. Glyn still runs her film
production company, but for the time being I’m immersed in this business. I’ll still call her two or three times a day and we’ll have a catch-up about the business every evening over supper. I don’t mind that it spills over into our personal life so much. In many ways I think our personal involvement is what makes the brand work.

Our roles cross over quite a lot. It’s a tiny business – us, the MD, the marketing guy and six people doing the practical stuff – so it’s inevitable,
but we play to our strengths too. Glyn is good at having a hard-nosed business sense, whereas I’m often more interested in the big ideas.

Glynis Murray
Although Henry and I run the company together, and own it together, we do have different skills and strengths and I think we play to those. He is much more into the whole farming aspect and into an attitude of, “If we just did this…” whereas my skills are more about new products and advertising and marketing. That said, we do overlap quite a bit too.

In fact, every decision that’s made around the business, we run past each other – even if it is a farming decision and I have to be told the
parameters before having an opinion. One of the things this means is that if there’s a mistake, we take responsibility. We don’t throw blame about.

Henry and I met through working together in the film industry. I suppose we’d never have got married if that hadn’t worked. But I think one of the greatest things about us running this company together is that it’s an incredible cohesive force in our marriage. There’s this totally mutual goal, which makes us exactly as keen as the other about its success. Every time we have a success it seems to make us stronger as a couple.

We never get cross with each other or argue. That’s not how we are as people. In any case, because we make decisions together, there isn’t much opportunity for arguing. I suppose if you have one business partner doing things without telling the other, there would be room for accusations like, “Why did you do that?”

This is very much a family business, so Henry’s two girls and my two boys are involved too. We talk about it a lot around them and one of my sons, who is about to qualify as a doctor, helps us with medical insights, while the other has some really interesting ideas, particularly around marketing to people his age – late twenties. He’s also a great cook and writes recipes for us. The girls have always shown a massive interest in the business too and are great at helping when we do tastings. Even when they were younger, we’d get them to help practically.

I’m starting to step back from the film world now. I’ve been running my own film production company for nearly 20 years and feel ready to be more involved in what feels like our new baby. Every evening when I get home from work, I can’t wait to find out the latest on Good Oil from Henry. We’ve got so many plans for taking the business forward.

Although I don’t mind the business spilling into our home life, I think the one thing I’d change is having to spend time at the barn every weekend. Something always seems to need doing at the barn and I wouldn’t mind that stopping.

When we started out in this business we had absolutely no knowledge of the food or retail business. But thinking back, our naivety may have helped us get through the door. I think people liked our story. Here were two people working in the film industry who’d stumbled across something and put years of effort into making it great. I think they liked not only the product, but the story behind it. I remember going to Sainsbury’s once and everyone looked the same – grey suits and cases with their products. We were casual
and didn’t quite have the right equipment to put our products in, but the buyer warmed to us immediately.”