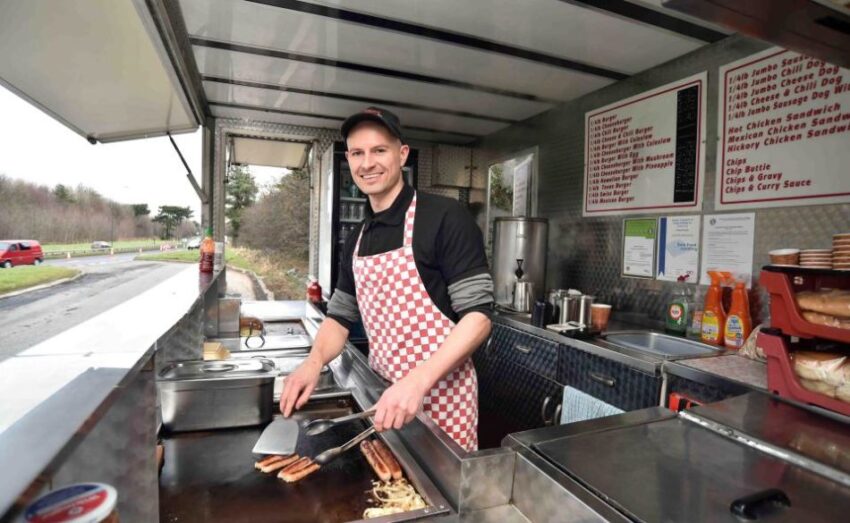 A burger van owner is considering hanging up his apron after making £9million while trading stocks and shares online.

Stephen Bliss, 34, manages his trading fund at night from his home in Redcar using the social platform eToro.

During the day, he can be found at The Sizzling Griddle off the A174, providing truckers with hot tea and bacon rolls.

During 2016, Bliss’s fund increased in value by almost 792 per cent according to his page on eToro which has been tracking all his trades since he first joined the network

However, with a projected six-figure profit for 2018, he now wants to trade online full time.

He has been trading on eToro since 2014, although he admitted it was a steep learning curve losing almost half of his original £3,000 investment.

He said trading stocks and shares online is easy.

He said: ‘You can open practice accounts and trade with virtual currency. I didn’t want to start throwing real money at it and end up losing it all.

‘About two years in, I got the hang of it and started feeling confident. I put some real money in, about £3,000 and lost about half of it.

‘They say never trade with money you can’t afford to lose but losing that was a bit of a blow.

‘After that, I went back to a virtual account and saved up more cash.

‘You find, when you transition to trading properly, your mentality changes and it affects the way you trade.

‘You’ll take positions that are in profit too quickly, when they start going the wrong way you tend to hold it longer,

‘You have to take all emotions out of it. It was a big learning curve.’

He said anyone planning to trade online should educate themselves before committing funds into the venture.

He described the eToro network as ‘a little bit like Facebook’, where you can invest money in top traders and let them make the decisions. Currently, almost 7,000 people have invested in Mr Bliss’s fund which has a value of $12.75 million – £9 million.

‘I’m bombarded with people’s queries, it’s every minute; responding takes up a lot of time, but we were asked to go to London and a Q&A live stream which helps.

‘I enjoy making money for other people. A guy messaged me saying he invested £60,000, I got it up to £200,000 and he messaged me to say he’s just gone on a trip around Malaysia with his mates on a Harley Davidson and wanted to thank me.’

The commission Mr Bliss has earned from the site amounts to six figures this year.

‘I really enjoy learning about it, the returns are far greater than what you get from putting money in a bank account.

‘Every year has been positive, I’ve returned 935 per cent this year which is significant, but I don’t expect to do that every year. My target is 5 per cent, which is a bit more realistic.

‘Now I want to step back from the catering business and focus on the trading full-time.

‘We get our regulars; a few have even invested so they pop in and we chat about it; it’s amazing how many people are starting to do it.’