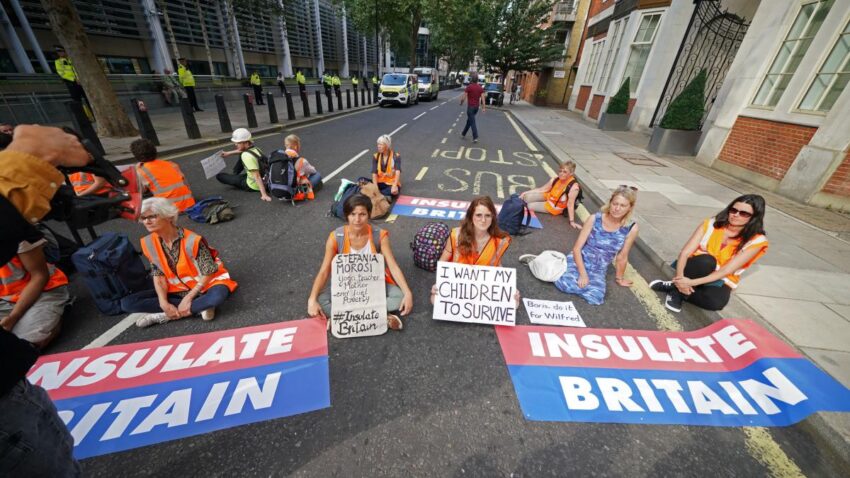 Ministers have privately conceded that court injunctions to ban Insulate Britain’s roadblocks will lead to a “cat and mouse” battle with protesters as they try to shut other key routes.

A judge granted an interim injunction yesterday but it applies only to the M25. Insulate Britain has vowed to continue its protests.

A source in the group, which wants the government to fully fund the insulation of all social housing, said it was considering plans to target other motorways.

The injunction gives police the power to detain on remand anyone who tries to impose a roadblock on the M25.

Government sources have conceded that they could be forced to follow the protesters around the country to seek further injunctions.

They said they had not applied for a nationwide injunction because it would be rejected on the grounds that it was not proportionate and would risk harming the right to protest. Minutes after Priti Patel, the home secretary, and Grant Shapps, the transport secretary, hailed news of the injunction, Insulate Britain vowed to carry on.

Activists took to the streets in London, protesting outside the Home Office building in Westminster. About 60 people blocked the road and made speeches before burning their police release papers.

A spokeswoman said: “We do not know the terms of the injunction and right now our campaign goes on . . . In focusing on us, Priti Patel is missing the bigger picture. Currently 8,500 people a year die unnecessarily in the UK because of their frozen homes, and climate collapse presents an incalculable threat to our way of life.”

She added: “As soon as the government makes a meaningful statement that we can trust, we will leave the motorway.”

MPs on both sides of the Commons tore into Insulate Britain’s actions yesterday. Steve McCabe, a Labour MP, suggested “those who are successfully prosecuted receive a sentence which ensures they’re put to work helping to insulate the homes of those less fortunate than themselves”.

Kit Malthouse, the policing minister, told MPs: “We do not change policies or make policies in this country through mob rule or being held to ransom.”

Holly Lynch, a shadow Home Office minister, said while the party backed the “fundamental freedom” to protest, they “backed the police” in the battle to prevent unsafe and illegal action.

Liam Norton walked out after Madeley claimed that he was a hypocrite because he lived in a home that was not insulated.

More than 270 arrests have been made over the past ten days in connection with the motorway protests.

However, police have been using laws that do not attract a prison sentence, which means that suspects can only be detained for a maximum of 24 hours.

Malthouse favours legislation that attracts a prison sentence, such as section 22a of the Road Traffic Act 1988, which allows a term of up to seven years for people who “intentionally and without lawful authority” cause disruption to road traffic. It would allow police to detain individuals on remand, preventing them from joining future protests.