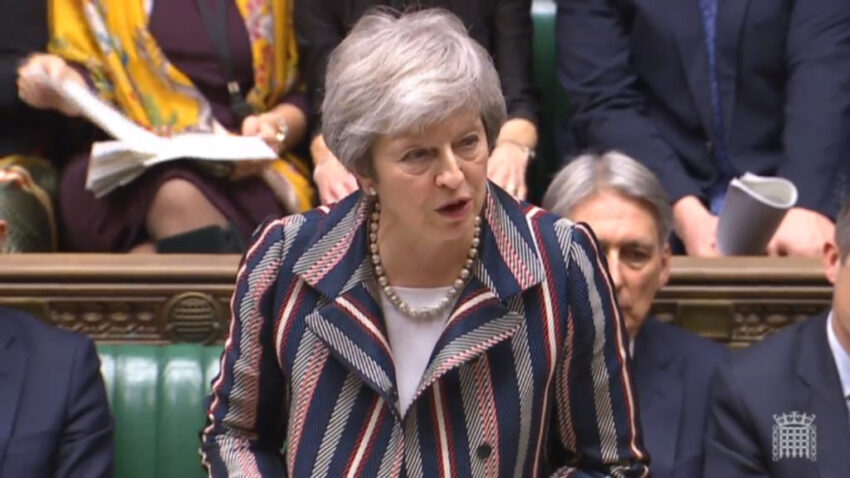 Withdrawal from the European Union under the Government’s plans could cut the UK’s GDP by up to 3.9% over the next 15 years, according to new official figures.

But leaving without a deal could deliver a 9.3% hit to GDP over the same period, said the analysis produced by departments across Whitehall.

And the UK will be poorer in economic terms under any version of Brexit, compared with staying in the EU.

The document did not put a cash figure on the potential impact on the economy, but independent experts have said that 3.9% of GDP would equate to around £100 billion a year by the 2030s, far outweighing the UK’s current contribution to EU budgets.

Meanwhile, the Long-Term Economic Analysis paper found that Government borrowing could be forced up by as much as £119 billion by 2035 if the UK quit the EU without a deal and up to £26.6 billion under a scenario similar to Mrs May’s plans.

The 83-page document was drawn up by officials from Whitehall departments including the Treasury, the Department for Exiting the EU, Industry, Environment, International Trade and the Home Office.

It was released as Prime Minister Theresa May prepared to head to Scotland on the latest stage of a tour of all parts of the UK to promote her deal to voters ahead of the crucial House of Commons vote on December 11.

Chancellor Philip Hammond acknowledged that all possible Brexit options will make Britain economically poorer, compared with remaining in the EU.

But he insisted that the PM’s plan – agreed by EU leaders at a Brussels summit last Sunday – will “minimise” the economic damage.

The Government analysis does not attempt precisely to forecast the impact of Mrs May’s deal.

But it compares the likely impact of the proposals agreed by the Cabinet at Chequers in July and set out in the Government’s White Paper with the alternative scenarios of Norway-style membership of the European Economic Area, a Canada-style free trade agreement with the EU and a no-deal Brexit.

It finds that GDP will be lower in 15 years under all Brexit scenarios than it would be with EU membership. And in all cases, national income will be reduced if migration from Europe is reduced from its current levels.

Potential outcomes range from a 0.6% reduction if the White Paper is accompanied by frictionless trade and unchanged migration levels to 9.3% if a no-deal Brexit reduces net immigration by European workers to zero.

The scenario which most closely reflects the Government’s plan would see the Chequers deal tempered by some trade friction and with zero net immigration from the EEA. Under these conditions, GDP could be expected to be 3.9% lower 15 years after Brexit than it would have been if the UK remained. If frictionless trade was achieved, the cut would be around 2.5%.

The North East, North West, Northern Ireland and West Midlands would be hardest-hit by a no-deal Brexit or a Canada-style FTA, while the pain would be more evenly spread under the scenario closest to Mrs May’s deal, with London worst hit.

Speaking to BBC Radio 4’s Today programme ahead of the document’s publication, Mr Hammond said the outcome of the PM’s preferred Brexit plan will be a “slightly smaller” economy over the next 15 years.

And he said under any scenario, in a “purely economic sense”, the UK will be worse off than if it stayed in the EU, as exiting will create “impediments to our trade”.

But he added: “What the Prime Minister’s deal does is absolutely minimises those costs, and reduces to an absolute minimum the economic impact of leaving the EU, while delivering the political benefits, in terms of being able to do third-country trade deals, having control of our fishing waters, and the many other issues that will be delivered politically.”

Having spent Tuesday campaigning in Wales and Northern Ireland, Mrs May will use her visit to Scotland to argue that the agreement offers the prospect of an “unprecedented economic partnership” with the EU after Brexit.

At the same time, she will emphasise that it will mean Britain leaves the Common Fisheries Policy, enabling the country to decide who it allows to fish in UK waters.

“At long last, we will be ‘an independent coastal state’ again – taking back full sovereign control over our waters, and free to decide for ourselves who we allow to fish in our waters,” she is expected to say.

While Mrs May continues to appeal directly to voters to support her plan, some questioned whether she would not have been better off remaining in Westminster trying to win over MPs who will decide whether to back the agreement in a vote on December 11.

With scores of Tory MPs having declared publicly they will vote against the deal, and Labour and the other opposition parties also firmly opposed, ministers have acknowledged the parliamentary arithmetic is “challenging”.

Meanwhile, the Government has become embroiled in a fresh row over the publication of Attorney General Geoffrey Cox’s legal advice on the Withdrawal Agreement.

Mr Hammond says Downing Street will ignore a House of Commons motion to reveal Mr Cox’s full comments, saying it would be “impossible for the Government to function” if such confidential material was made public.

He was speaking after leading Tory Brexiteer Sir Bill Cash backed Labour’s call to release the full comments Mr Cox made to Cabinet.

Asked on the Today programme if it was right to do so, the Chancellor said: “No, there’s a very important principle here – that the Government must be able to commission impartial legal advice which absolutely tells it like it is to enable it to shape its decisions, while always complying with its legal obligation in the negotiations.”

Mr Hammond added: “It would be impossible for Government to function if we create a precedent that the legal advice that the Government receives has to be made public.

“We must have, as every other citizen has, the right to take privileged legal advice which remains private between the lawyer and the client.

“So the client has the ability to ask the difficult questions, to receive full and frank legal advice, and then to make decision based on that full and frank advice.”