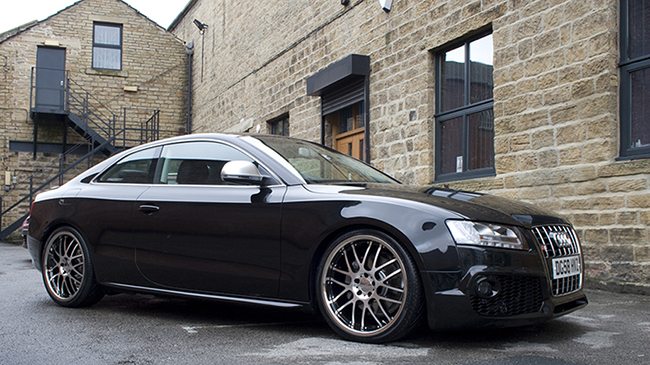 Where Audi really needed to improve its game was in the driver involvement department.

With the A5, it has just done that. The coupe features a wide track, its steering has been engineered from scratch, the quattro 4WD is biased towards the rear and the front axle has been moved forward 120mm to counteract understeer. All this work has had the desired effect.

The A5 offers meaty steering, good turn-in and, impressively, a better sense of balance than the firm’s storing RS4. Thanks to its 4WD traction, the car is also very efficient through corners – especially slow ones. As standard, the Audi is comfortable, particularly on motorways where it has a quiet, forgiving ride. As for engines, the launch 3.0-litre TDI has been developed, and now delivers more power.

It doesn’t feel like a normal diesel – it’s smoother, with good composure and minimal diesel-like rattles. It pulls cleanly from below 1,500rpm and revs to an impressive 5,200rpm. 0-60mph in 6.2 seconds is potent, though the gearbox is springy and transmits vibrations.

The A5 is impressive, but it’s best viewed from a distance, where you can appreciate the subtle line that forms the car’s shoulder, and the sweeping roof that flows down into the bootlid, ending in a tiny lip spooler.

If anything, we thing the rear is more successful than the generic nose, and the front end is only  distinguished from other Audis by the standard xenon headlamps with their dramatic LED running lights.

Up close, the first thing you notice is how low the A5’s roof is. When you open one of the relatively short doors, you seem to have to dip much lower to get in. but inside, it’s a full four-seater – finally, it’s a return to a market Audi abandoned in 1996.

The Audi offers a fairly extensive range of engines, including the 3.0-litre TDI we tested, plus a 3.2-litre V6 petrol and the superb 4.2-litre V8 S5. There’s just the single bodystyle. Its arch rival is the BMW 3-Series Coupe – this car is a competitor to that model in absolutely every respect, and you know Audi has benchmarked its Munich counterpart to the nth degree.
The interior is all-new for the A5. We expect elements of the design to appear on the next A4, but in the meantime the Audi’s cockpit looks and feels unique. But that’s not to say it’s perfect. The new key is rather clumsy, the switches for the electric windows click nastily and the heating controls are fiddly.

Nevertheless, the cabin has a quality feel, while the dash’s wraparound effect enhances this and provides a sense of space. You won’t benefit if you’re sitting on the cramped rear bench, though, while you’ll struggle to get your feet under the front seats. But what’s been taken from rear legroom has been given to the load bay – the A5’s 455-litre boot is huge. It’s pretty economical too, while retained values look extremely glittering.