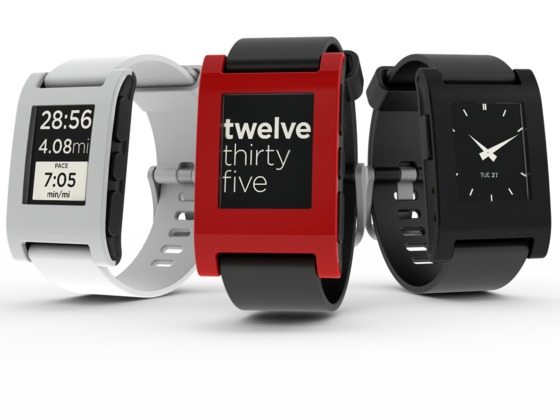 The Pebble has an e-ink display similar to those found on e-readers, and last seven days on one battery charge, reports The BBC.

The 1.26in (3,2cm) screen is able to display a multitude of apps as well as tell the time.

Pebble is to date the most successful Kickstarter project, but had been hit by development delays.

Cash pledges
Originally intended to ship to backers in Autumn 2012, the watch will now go first to those who contributed to its funding, before then being shipped to those who have placed pre-orders. On the Pebble website, the watch costs £110 ($149).

The first watches will begin shipping on 23 January.

It will be mass-produced at a rate of 15,000 units each week, project founder Eric Migicovsky told reporters at CES. It would be generally available in about 6-8 weeks, he said.

Third-party developers will be able to create apps for the watch which can pair up with smartphones running Google’s Android software or Apple’s iOS.

At the press event Mr Migicovsky demonstrated how the watch can be used to wirelessly control functions on a smartphone – such as playing music while a device is in a docking station.

Wearers can also receive text messages and emails through the device, as well as manage incoming calls.

Pebble’s makers have paired with notification service If This Then That (IFTTT), a site which allows users to set up custom actions such as receiving a notification when weather changes, or when a news website is updated.

Mr Migicovsky said that the watch depletes a smartphone’s battery by around 5-10% per day. To charge the Pebble itself, a cable must be attached.

Thomas Stuermer, from Accenture, said he believed this could be a problem.

“The problem is that at the moment the more features you put on there the more they consume power,” he said.

“Contactless power chargers are starting to take off – but they still involve putting devices down on pads. Until wireless power becomes a bit more contactless it probably still won’t work well on the watch platform.”

Smartwatches have been common place in technology for some time, although to date the market is largely dominated by sports brands such as Nike and Adidas whose products offer fitness statistics, route tracking and pacing data.

By the end of its 38 day funding drive it had raised more than $10m and had almost 70,000 backers. More funds were raised via its website as people put down cash to reserve one of the first devices.