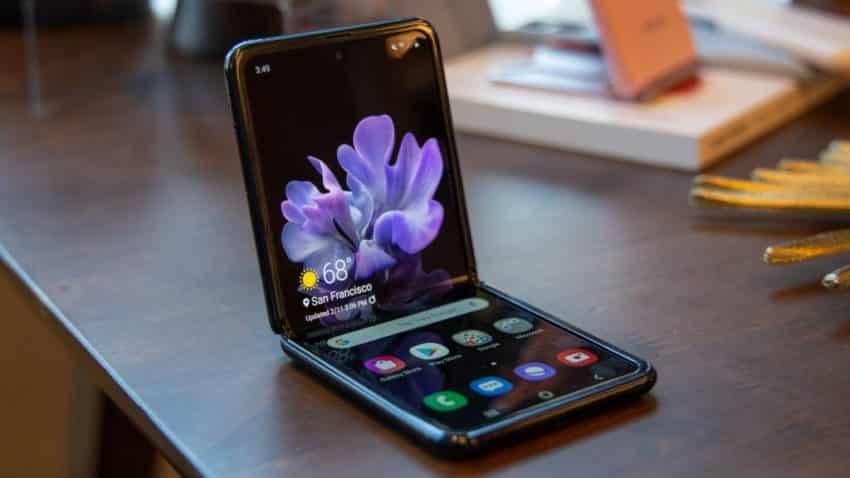 It’s not often something comes along to genuinely change the game, but the Samsung Galaxy Z Flip does just that, bringing foldable displays closer to the mainstream and reinventing the flip phone for 2020 in the process.

Screens that fold in half finally arrived last year with the Galaxy Fold, which was originally plagued by durability issues causing a delay and a reworking of the device.

The £1,300 Galaxy Z Flip is therefore Samsung’s crucial second bite at the cherry. And it’s a very impressive one at that.

Performance all-round was good. Snappy, fast and smooth, similar to the Galaxy Note 10+, but not as rapid as the best, the OnePlus 7T Pro despite having the same chipset. If you’re into hardcore mobile gaming this isn’t the phone for you.

Battery life was solid but not quite up to the standards set by the very best last year. The Galaxy Z Flip lasted about 27 hours between charges of medium to heavy usage.

That was while using the phone as my primary device, lots of email, messages and push notifications, a couple of hours browsing, five hours of Spotify via Bluetooth headphones, 45 minutes of Netflix and about 10 photos.

The hinge opens and will hold the screen at any angle, similar to a laptop. It’s smooth and reassuringly solid. What you can’t easily do is flip it open with one finger, but you probably shouldn’t even if you could because the screen is fairly fragile – more on that later.

Closed, the phone is a compact wedge shape with little rubber feet and magnets holding the two ends together. You’ll be able to fit it in most pockets, including the often useless-for-phones tiny pockets women are burdened with.

There’s a small 1.1in oblong screen on the lid of the device adjacent to the main camera. It shows the time, the battery charge and a little notification dot if there’s something waiting for you. Double tap to light it up, swipe left for music controls and right for notification icons, which you can tap and see a little bit with scrolling text. It’s useful when you want it, but also easy to ignore, freeing you somewhat from the burden of notifications.

Open it out and the 6.7in screen is remarkable. It looks and feels just like one of Samsung’s regular super-sized smartphones, which is a very good thing, apart from one caveat: there’s a crease in the middle. You can feel it, and get a reflection on the screen and you can see it.

What feels weird at first under your thumb immediately becomes normal. It’s more visible when the screen is black, which makes the Galaxy Z Flip the first phone that looks worse in dark mode. You can’t see it while browsing a white web page or similar.

The crease is one of the compromises of having a massive screen that rivals the very biggest smartphones available today, but that folds down into a small, pocketable package. I think it’s a worthy trade-off for now.

The power button doubles as a fast and accurate fingerprint scanner, mounted below the volume buttons on the upper half of the phone.

The screen works, looks great and the hinge feels sturdy. It’s rated for more than 200,000 folds, which is 100 openings a day for 5.5 years. It has nylon fibres in the hinge to literally sweep dust and dirt away as you open and close it, while the edges of the folding part have plastic T-shaped caps to try to block dirt from getting in that way.

But there’s a massive question mark over the screen’s durability. It comes with care instructions wrapped around it in the box, including advice not to press hard on the screen with hard objects, such as your fingernail; don’t fold something else in when closing the phone; the phone isn’t dust or water resistant; don’t put stickers or screen protectors on it; and keep the phone away from credit cards as it has magnets in it. You can’t say you haven’t been warned.

I was only given three working days to test the device and in that time it worked perfectly. Others haven’t been so lucky. Realistically you need at least several months of daily use to truly know if it will stand the test of time.

Then there’s the scratch resistance of the glass screen: basically there isn’t any. It uses ultra-thin glass that can fold, which is remarkable, but it’s covered in a plastic layer and is so thin it’s easy to poke holes in. The screen is fairly well protected when closed, but it’s possible to get grit in between the two halves, while pushing hard with your fingernail could damage it.

Samsung is offering a one-time £99/$119 display repair service, but after that you’re looking at a hefty cost in the region of £400.

All in you have to treat it with the respect deserving of a £1,300 device, and even then you might run into trouble. If you’re at all blasé with the way you treat your smartphone, this isn’t for you.