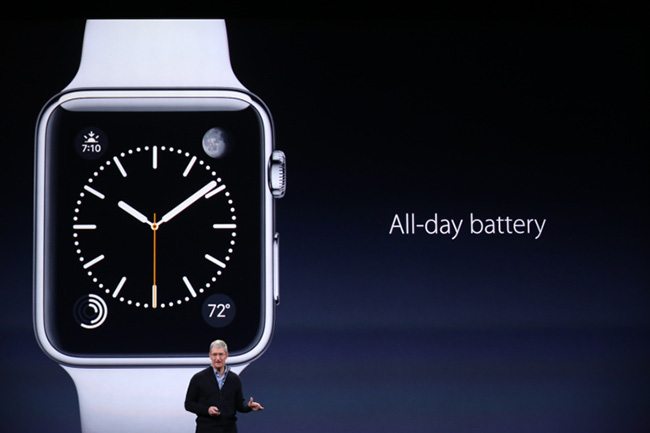 Whilst clearly the watch will sell like hot cakes and many businesses and apps will be developed to embrace the additional wearable tech that this will bring with it, but 18hours based on: 90 time checks, 90 notifications, 45 minutes of app use, and a 30-minute workout with music playback from Apple Watch via Bluetooth is being universally questioned as being an effective options.

When the Apple Watch’s battery drops to a determined level, it automatically switches into Power Reserve mode, allowing the device to tell the time for up to an additional 72 hours.

Apple also states that it takes 2.5 hours for a full charge.

According to Apple, these stats were gathered during a March 2015 test using a preproduction Apple watch paired to an iPhone using preproduction software. Apple warns that actual results may vary due to use and configuration.

Battery life appears to clearly be the Achilles heel for the Apple Watch. It’s unquestionably a beautiful and capable device, but if the battery life falls short even a touch from these advertised claims, it will leave many users wishing that their had stuck to a 1980’s Casio watch as they will be wearing a device that can just tell the time and not call an Uber.

Speaking about the announcement, Nick Barnett, CEO of Appsme.com, said: “For retailers, there is excitement about Apple Pay, which is already in use in the US with an iPhone, and is potentially made even easier with the Watch. Just a wave of the hand can pay for your morning coffee, as opposed to a wave of your iPhone or your wallet with a contactless card inside.

“But perhaps more interesting is the potential for integration of iBeacon technology in the Apple Watch. From a marketing perspective perhaps the Apple Watch will, at last, make real time, location-based marketing a reality.

I remember years ago when I worked on mobile data strategy at O2, we often talked about the idea of getting a ‘local ad’ on your phone, for example a discounted coffee as you walked past a coffee shop. While this is technically possible today with geo-marketing cell-site technology and/or iBeacons, the uptake hasn’t happened as there are simply too many barriers and too much complexity in place. Could the idea of pushing these notifications straight to your Apple Watch make it real? Quite possibly, and app-builder solutions are looking at making it easy for SMEs to build apps for their customers that do exactly this.

“So what does this actually mean for someone running an independent business on the high street? It means that they can now get more customers through their door, more often. That means more sales, and more profits. Simple, and made easy using a business app that their customers can have on their phone – and, in time, their Apple Watch.”