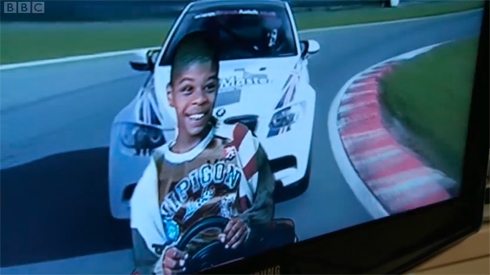 The blue screen task was a good one. It combined lots of elements and was a real test for both teams. Similar to last week, they had to be creative and marketing savvy – although ultimately it was a selling task.
I was happy to see both Stuart and Sandeesh selected as team leaders this week. It was defiantly time for both of them to step it up and prove their worth.
The two PM’s seemed opposites of each other.  Stuart ‘the Brand’ is a complete irritant, whilst Sandeesh seems a bit of a push over.  They are two completely opposite personalities.
In the early weeks I thought Stuart would be one of the first out. His role as PM forced him back into the limelight and after his early boardroom runs there really was no room for error.  Ha ha, it made me smile when Nick said Stuart left him “trembling with irritation” and “who does he think he is?”
Stuart choosing the track day seemed like a lot of fun but to be taken seriously as team leader he needed to be driving the task behind the scenes and not behind the wheel! He needed to put in some hard graft but instead just wanted to have fun. I can’t blame him for being tempted to take the car for a spin but if you are serious about winning the show you have to put in the graft and the leg work.
Stuart ‘the brand’ directing his team
Apart from his irritating habits and management style the biggest issue with Stuart seemed to be is complete inability to make concrete decisions and stick to them.  In the end this actually paid off.
Having argued the videos wouldn’t sell to kids he changed his mind and ultimately that helped save the day.  Having said that – he should have paid more attention to his other team members from the get go.
During the task Stuart was also blatantly setting up Joanna and Laura by saying that if they fail to sell, it would be solely their responsibility- hardly motivational or encouraging stuff.  Had they lost the task it would be interesting to see how he would have defended himself because it was his shoddy editing skills that reduced the number of sales the girls had made.  His pricing fiasco was laughable too – you can mark down but not up!
For Apollo, I thought Joanna’s sales pitch was great and the medals idea was a master stroke.
For Sandeesh it was a major error not having the stall open on time; especially when this had already happened in the Trafford centre task.
It’s unbelievable to think that she used valuable selling time to train team members who could have received training before they hit the store.  Definitely a school girl error from Sandeesh here.
Liz’s quick thinking by getting the car and undercutting the opposition showed great initiative and it looked like it might have saved their flagging sales. Although they really should have thought of this before reducing their prices.
The price drop came at 3pm but the store didn’t close until 8pm.  Sandeesh dropped the prices far too soon – as Lord Sugar said, it’s often a soft option to drop prices and it doesn’t mean you will meet your targets.  Combined with purchasing too much stock and opening late – that’s exactly what happened here.
Sandeesh in The Boardroom to face the music & ultimately the ‘finger’
Team Apollo ended up with a profit of £262.50 and team Synergy with a profit of £ 222.97. Like previous weeks, this was a close call and had Sandeesh opened up the stall on time – they may well have won this week.
I actually thought Sandeesh did a half decent job as PM but the order numbers and pricing was all wrong. She should have overseen that and after her recent boardroom run-ins, there was only one person who was going to leave this week.
Chris has now been in the bottom three twice in a row. I’d like to see him lead from the front next week as I think he has something to offer. Liz was unlucky to have been brought in but she dropped the ball with the numbers last night and needs to come back fighting next week to prove it was just a one off.
Overall, as Lord Sugar said, it was too little too late for Sandeesh and ultimately she didn’t have that ‘killer instinct’ that’s required to make it in the show.  She was definitely the right one to be fired.