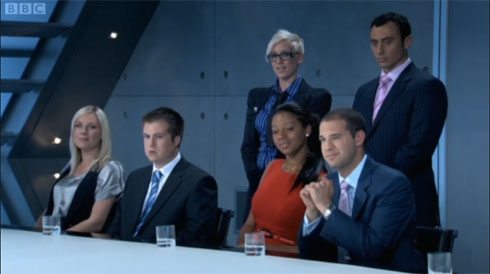 Like any season of the Apprentice, the bitching continues. It still hasn’t become clear to contestants that if you work as a team, you achieve the desired results. If you bitch as a team, the results go out the window. Laura, Paloma and Sandeesh are the really guilty ones when it comes to team politics. If they worked together, maybe they wouldn’t be standing in a clearly interested clients doorway bickering. Professionalism is something which they could certainly do with a lecture on.
I don’t think Jamie was given enough credit for his managing skills. Melissa is not an easy person to manage, and having the prerogative to basically cut her off was fair play to Jamie I think. He had to do what was right for the team and with Alex, Chris and Liz putting a mighty load of effort in, it seemed the right choice.
Seeing the funny side: Nick Hewer
Of course it wasn’t only Melissa that brought the team down, but it rarely is just one person. Stuart was incredibly rude to the BabyGlo client – resulting in the other team getting a £90,000 deal with Kiddicare. If there is a golden rule in business, it is this – always be polite to your prospective clients. No one in their right business mind will sign a deal with a brash, ill-mannered ‘entrepreneur’.
Stuart continues to think that his age is some kind of advantage to him in the competition, however as Lord Sugar so rightly puts it – ‘it’s not kindergarten’. The fact that he is young can, in many ways, appear as a disadvantage I think. Knowledge comes with experience right? Experience can only grow with age.
However, I couldn’t agree more with Lord Sugar’s decision on firing Melissa. She is such a fire ball, and not in a good way. Her teenage-like strops were only the beginning of her self-centredness. There was no team spirit there. Yes, you may think you’re good at pitching, but basically backing a client against the wall is never a good selling tactic. They need to want the product you’re selling, not feel like they’ll be throttled if they say no.
Argument: The girls arguing about whose sale it was…
Another great characteristic in business is being a good sport, and not having a bitch about your team mates even after you’ve been given the push! By labelling Stuart and Jamie as ‘horrible people’ who had ‘ganged up on her’ just shows how embarrassed she was. If she was in full control, maybe she could achieve something but good team work and delegation skills should certainly not be on her CV.
As I said, the bar was really set last night, there are some really good candidates there but it’s hard to spot the winner now. Laura should be the next to go, all she seems to be good at is arguing. Hopefully from now on we’ll see some more business and less bitching.
Lee’s Raw Talent Academy aims to provide SMEs and corporate organisations with the vehicle to build internal sales academies into long term staffing plans and to encourage organisations to look at the wider raw talent we have in the UK and not just graduates. Lee, who has over ten years experience working in recruitment and over seven years as an employer of sales people, is passionate about giving job seekers an opportunity to earn a career – and Raw Talent Academy aims to give the unemployed community that chance.