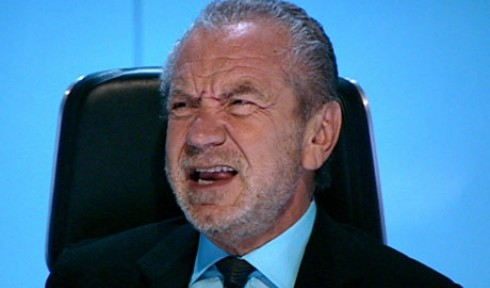 The front-man of TV’s The Apprentice should forget the football metaphors and get behind the Coalition and their plans to kick-start the economy through the efforts of entrepreneurs in the private sector.
Talk about not knowing when to keep your gob shut!
After a particularly unsuccessful spell playing for non-league Labour under the awful management of Gordon Brown, Alan Sugar has now decided to resort to football metaphors.
“It seems to me that a skilful manager who can take a lower league side into the Premier League is just what we need right now, but then I guess it’s not so surprising that Lord Sugar is a fan of Brown’s abysmal relegation of the once great Labour to the lower league, since he did a great job of crippling Tottenham Hotspur for a decade.
Does anyone remember him choosing the not-so-successful Swiss manager Christian Gross as Spurs boss?”
Image courtesy of WSC
I launched Pimlico Plumbers with just a bag of tools and a very old van bought at auction in 1979 and we over 133 professional plumbers and a support team of around 35 staff, with a turnover in excess of £15 million.
If we’re talking football metaphors, I think that makes Pimlico Plumbers the Manchester United of UK plumbers!