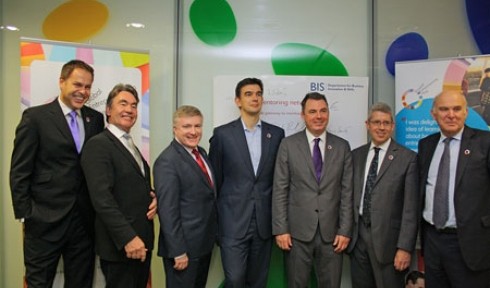 I had just attended my first meeting of the Rt Hon Vince Cable’s Entrepreneur’s Forum. For nearly three hours I had met with some great UK-based Entrepreneurs and business owners and together we had discussed some of the issues facing businesses at the moment.
This was not simply a talking shop or an update of Government policy; we passed on our own experiences and opinions as well as suggestions of what we felt could ease the burden on existing and start-up businesses.
So I left believing there may be a real possibility of changing the landscape for any budding entrepreneurs and fledgling enterprises; an area I am particularly interested in.
In the same week, however, the clouds of a gloomy future descended quite rapidly as I heard of the demise of Enterprise UK (formerly known as Make Your Mark). I have been an Ambassador for Enterprise UK for much of the last three years and I have attended and spoken at many of their events across the north of England, all of which encourage young people to consider a future in enterprise.  Isn’t this what the government wants? Don’t look for a job – create jobs.
Yet this initiative, which covered the length and breadth of the country and engaged with thousands upon thousands of people, populated by not only a great team of staff but also visiting speakers, panelists, event hosts, role models, will disappear in a matter of months.
This announcement was followed by two direct emails to myself; one of which announced the closing of an Enterprise Centre which I had helped ‘launch’ in my home area of West Leeds. This centre was there to encourage people to step out of their day to day benefit driven lives or current unemployment and consider making a job and future for themselves.
I think these centres which have been created in the heart of where the people who need them actually live, are a great initiative but sadly this one and many others will disappear.
Close on the heels of this I heard from a social enterprise called Activity Agreement based in my home town, which was also to close. I had visited the centre to meet the young people the initiative was aiming to help; teenagers who perhaps were not the best academically or could not engage with school or those who did not have the home support.
But by attending the centre they were exposed to other subjects, perhaps more practical and exposed to different learning techniques, not simply listen and copy but to get up and do things for themselves. This gave these young people more direction, more purpose and more confidence. But that too has disappeared.
So, it was a week of polar opposites. I am hopeful that, at a national level, the Government is listening and will take advice from those who live in the real, everyday world of business with a view to improving the future of UK Plc, but I cannot help worry that we are cutting too close to the roots of our future entrepreneurs and future businesses.
We all want to see a healthy business resurgence and recovery over the next five years but personally, I also want to see a generation of business in 10-15 years that were created now.
Created by people who are just becoming interested in enterprise, businesses that were inspired by people who currently contribute to enterprise in all its forms and most of all, that they were start up business which were supported 100% by elected groups who promised to invest in enterprise.