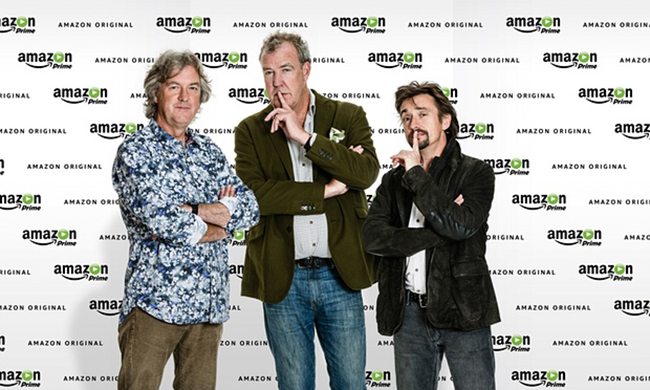 The as-yet unnamed Amazon show, which was announced on Thursday, ended months of speculation after Clarkson was dropped by the BBC following a fracas with a producer.

The show will be made by Clarkson’s long-time friend and collaborator, former Top Gear executive producer Andy Wilman and will see the new show air online as part of a three-year deal.

I am not surprised that Amazon emerged victorious in this three-way battle to sign the presenting trio with ITV and rival on-demand service Netflix also bidding for their services. It is not the first time that Amazon has looked to the BBC – the internet firm resurrected BBC1’s period crime drama, Ripper Street, after it was axed.

ITV appeared to be dead in the water as it emerged that the trio had non-complete clauses in their BBC contracts and with Netflix being the dominant streaming service, and home to Kevin Spacey’s acclaimed remake of the BBC’s House of Cards, Amazon had to hit back hard and with Clarkson, Hammond and May’s global appeal it seems to be a sure fire winner and the most cost effective customer acquisition deal possible.

The deal is also a sign of the growing importance and financial muscle of internet firms in the world of broadcasting, with Amazon and Netflix competing with traditional TV channels for viewers around the world.

I have had various music and video streaming services for years now as I started off with Pandora, the music streaming service which 8 years ago was an early forerunner to Spotify and then Apple Music. I also agree with the BBC’s decision to move content that it currently broadcasts on BBC3 online.

Traditional TV broadcast to a box, or as is now the case a slim screen to your living room, is dieing but if Amazon was not careful there was only going to be one winner in the shape of Netflix.

Andy Barr, Head Yeti at 10 Yetis Digital, agrees with me as speaking about it together earlier he told me: “As we said back in March, when Clarkson-gate first landed, the Top Gear and three presenters personal brands were far from toxic, both in terms of financial clout and global appeal. Amazon stepping in and securing three seasons is a major coup for the retail and streaming giant.

It is going to help them grow their audience and customer base in territories that they could have only dreamed of. No matter what Amazon has paid to secure the trio’s services, as a customer acquisition campaign it is no doubt going to work out worthwhile. The only losers in all of this is the BBC.

From a media analysis point of view, this is a clear win for Clarkson, May and Hammond and a monumental win for Amazon in its war with Netflix and traditional terrestrial TV providers around the world.”

As I said when the BBC sacked Clarkson, essentially killing the Top Gear brand as it currently stands, I would not have made that decision as the cost to the corporation is likely to be huge, but it seems that aunties loss will be Amazon’s gain with possibly NetFlix also pulled down with it as do you really need two digital steaming service accounts? Amazon charges £79.99 a year and Netflix £7.99 a month.

There will be interesting choices ahead next autumn when the new ‘Top Gear’ launches and content will be king so what will Netflix counter this new Acquisition with? But one thing is for certain the consumer could be in for a treat…