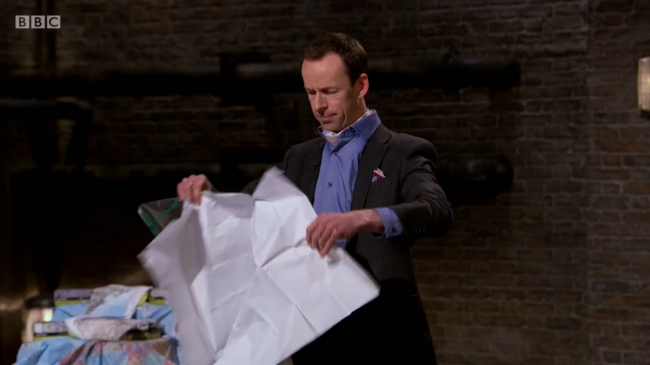 If you’re looking for the wrong way to approach a bunch of eager investors, last night’s episode of Dragons’ Den abundantly portrayed this. Marco from tailor-made meal company ‘Pro Gains’, is a typical example of how over ambition can blow your opportunity in the Den.

His initially precarious presence, as a viewer, outlined clearly that this young entrepreneur was in for a rocky ride. His rather prosperous asking of £125,000 of investment matched the ambitious attitude of this MD. He claims he eventually wants to cook up a whopping £20 million valuation for his company, after lying about its security of a trademark name – school boy error! Deborah Meaden’s curiosity proved right as the entrepreneur had only merely applied for a trademark for his company – which was in fact rejected.

Challenged by comments from the Dragons who claimed Marco would be difficult to work with, a desperate plea was made in attempt to let the Dragons in on his difficult background. An empathetic Peter Jones although understanding to this entrepreneur’s position, still couldn’t bring himself to make an offer for his meal company.

After leaving the den, Marco’s passion seemed to have become weirdly admiring; with having somewhat ludicrous aspirations that he’s still convinced he will achieve. What ruined it for me was the fact that after commenting on his pitch in the den, Marco stated how he believed the Dragons ‘feared’ him suggesting an inference of being threatened by his potential for success which totally contradicts the point of going into the den. Lucky escape for the Dragons, I’d say!

Moving onto dynamic duo, Danielle and David, who were proposing their analogue optical cable invention, claiming for its existence to possibly change the music industry for the better. Entering the Den with a rather rocky and musical performance, instantly grabbed the attention of all Dragons but also the viewers at home. This intriguing introduction engaged us into the pitch, along with their impressive, appropriate name dropping including the likes of Cold Play. However, these particular aspects didn’t quite impress the Dragons to the extent that they would be confident in a repeatable business – something a key investor would seek. Although the ‘amazing’ invention appears to work well in the industry so far, its limited number of three prototypes – yes, three – is causing a lack in the business opportunity. Touker’s widening eyes saw the potential for the product and the business gratefully accepted a £70,000 investment for 35 per cent equity.

In my opinion, a rather pointless idea followed.

David from ‘Splash Maps’ entered the den wanting £60,000 investment for a 15 per cent share in his waterproof, washable and wearable fabric map company. First of all he claimed to have made a ‘terrific’ turnover in the last year… £35,000. His somewhat easily impressed view on his figures did not match the view of the Dragons who found themselves slightly lost especially when it came to his rather pushy turnover prediction of £1.8 million by year three.

From then on, unfortunately for David, his pitch gradually started to head south. Maybe years ago, before the introduction of new technology, his invention would have gone down a storm, however, with the invention of smartphones, how many people do you know that use a physical map anymore? Perhaps David should navigate to a more potential destination, making a U turn on this idea is probably best in terms of growing the business. He is left gutted, leaving the den empty-handed – no investment and advice to take a new direction.

Moving onto Andrew, a pitcher who captured the hearts of our Dragons, by drawing them into his emotional and struggled past. Becoming emotional during his pitch, he managed to pull on the heartstrings of our investors and his early on hiccups in reference to his slightly false figures were once blurred by the end of his time in the den.

His universal man hole cover key company helps to reduce the equipment needed for the relevant labour workers. It was rather inevitable to think that Deborah Meaden may invest, due to her successful involvement and valuable contacts within this particular industry. However, her uncertainty was in Andrew himself. She believed he wasn’t the right person to grow the business and demanded he find a business partner, to go along with her offer of all of his asking price of £40,000 for a 35 per cent share – 10 per cent more than his equity offer.

As the background music began to dramatise, Peter Jones competed for a mirroring offer of Deborah’s, this time for a 40 per cent share. In an attempt to somehow receive an involvement within this potential business, Peter then made a tactical offer seeking a pairing with Deborah. A decline from Deborah releases a feisty claim from Peter stating how his involvement with the business would make it as successful as possible.

Andrew saw Deborah being the key to his business success and kindly accepted her offer, which whilst predictable was a sensible outcome.