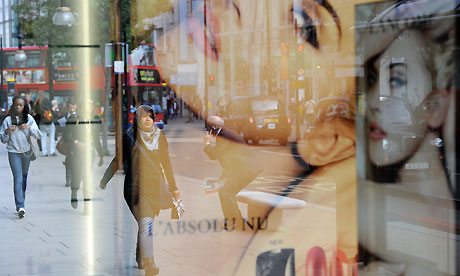 Retailers hoping that the feelgood factor from the London 2012 Olympics would translate into a boost for sales have been left disappointed after data from the British Retail Consortium showed that August was the weakest month for sales growth so far this year, reports The Guardian.

The findings of the monthly survey contrast with the predictions of many retailers and experts who had expected the London Games to bolster spending even after the West End of London was quiet during the early part of August when the competition began.

On a like-for-like basis, which strips out new store openings, sales by value were down by 0.4 per cent on the same month a year ago, when they fell 0.6 per cent. With new openings included, sales were up 1.6 per cent – compared with a 1.5 per cent rise in August 2011. Both these figures are the lowest since November last year.

The BRC survey found that the comparatively empty shopping streets in London were offset by a better performance in other parts of the country and that there had been a “mild” boost to sales of party food and drink.

But food and drink sales did not compensate for what Robertson described as a “really weak performance for non-food goods”. Clothing had a “very unusual and rather disappointing month” although large screen TVs sold well in the first week of the Olympics.

“Retailers have clearly looked to maximise the sales opportunity around the London 2012 Olympics… Tesco, in particular, had some very attractive offers during July and August which will have helped to increase the frequency of shoppers’ visits,” said Mike Watkins, Nielsen’s UK head of retailer insight .

The BRC said that a huge impact was felt online where there was growth of 4.8% in August – the lowest since such data was first collected in October 2008 – although Robertson said this was likely to be little more than an “interlude” in a trend of rapid expansion in online shopping.

“It’s clear people were absorbed by the magnificent Olympics and had little interest in shopping, especially for major items… Some retailers told us online activity was particularly thin in the evenings. If people weren’t watching television they were more likely to be following the sport on PCs and mobile devices rather than shopping,” Robertson said.

But while retailers were disappointed by trading in August, other data published on Monday showed that the decline in UK manufacturing slowed in August, raising hopes that Britain could emerge from recession this year.

The data could reinforce expectations that the Bank of England will not announce any increase to the £375bn quantitative easing programme, and will keep rates on hold at 0.5% when it meets on Thursday.

The manufacturing PMI jumped to a four-month high of 49.5 in August, close to the 50 mark that separates growth from contraction. Economists had been expecting an improvement from July – when the index hit a three-year low of 45.2 – but consensus forecasts were for a reading of just 46.1.

Britain slumped into a double-dip recession at the start of the year and the Office for National Statistics estimates the economy shrank another 0.5 per cent in the second quarter.

August is traditionally a weak month for retail sales and the next three months in the run up to Christmas shopping season will be watched more closely as they have an impact on retailers’ profitability, according to Helen Dickinson, head of retail at KPMG which compiles the survey with the BRC.

Robertson added: “As summer gives way to the all-important Christmas run-up, retailers will be hoping sales that didn’t happen in August have been postponed and not lost entirely.”