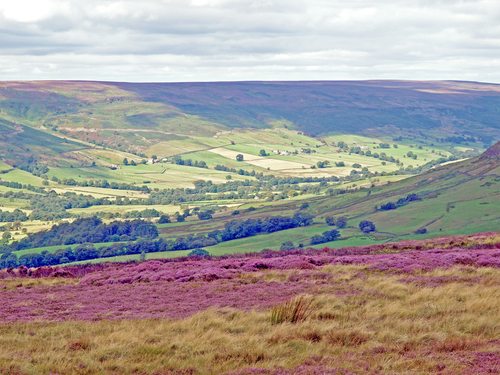 Dozens of Yorkshire farmers are on the verge of becoming millionaires thanks to a 250m-year-old layer of minerals a mile below their muddy boots, reports The Guardian.

Chris Fraser, a former investment banker, has submitted a planning application to mine the world’s largest deposit of potash, a powerful fertiliser, in an ancient seabed deep below the North York Moors national park.

Fraser, who has been planning the mine for a decade, said exploratory boreholes showed the moors held “the world’s largest and highest-quality resource of polyhalite”, a mineral-rich form of potash.

If the planning application, which is supported by the local council and all neighbouring MPs, is approved by North York Moors national park authority, it will lead to the construction of the biggest British mine in a generation and create 1,000 jobs.

Landowners could be in line for a lottery-style windfall because Fraser’s company, Sirius Minerals, has promised to pay out more than £1bn in royalty payments over 50 years.

“The landowners own the minerals and we will pay them a royalty for using them,” Jason Murray, finance director of Sirius, said.

He refused to disclose exactly how much landowners would be paid, but said a complex royalty payment formula had been agreed after two years of negotiations between 400 landowners involving eight law firms.

“Some of them will become very wealthy,” he said. “There will be a few new tractors around the area.”

He said some large landowners near the mine, south of the village of Sneaton, nearby Whitby, would become multimillionaires within a few years. If the £1bn were split evenly between all landowners, each would collect about £2.5m.

Fraser, a former Citigroup banker, will also make a packet as he owns 8% of the company. Other directors own about a further 8%, with 10% held by people local to the mine. The remainder is owned by institutional investors.

The potash [potassium-containing salts] and polyhalite deposits are the remains of a Permian-age sea that stretched from England to Poland 250m years ago.

Geologists have known for decades that the moors contained big mineral deposits, and global mining companies submitted plans for mines in the 1970s but did not follow through when the price of potash dropped.

“Rio Tinto looked at it in the 70s, when the prices were about $100 a tonne,” Murray said. “Then when the price fell, lots of the data was left in a garage.”

Of the mining planning applications granted in the 1970s only one, Cleveland Potash mine near Boulby, ever began operations. It is still working today and is the UK’s biggest mine, but would be surpassed in size by the Sirius mine.

Soaring global demand for fertiliser has sent the potash price beyond $400 a tonne. Recent test drilling resulted in a near-doubling of the moor’s expected potash reserves from 1.3bn tonnes to 2.2bn – making it the world’s biggest potash deposit. Murray said there was so much of the mineral under the moor that there was “more than you could ever mine”.

The location of the potash inside a national park made it very difficult for global mining companies to progress mining projects. But Murray said that the rising price of potash had made it possible to invest more money in making the mine unobtrusive.

“As much of it as possible will be underground, and what is above ground will look like farm buildings,” Murray said. “It won’t look like a traditional mine.” The mine shafts will not be visible from the ground. Instead miners will walk 300 metres down an inclined path to the top of a 1,600m lift shaft down to the polyhalite shelf.

The raw material will travel up another shaft before being crushed, mixed with salt water and pumped 28 miles (45km) along a pipe to a Teesside processing plant. “We’re using a lot of subsurface buildings,” Murray said. “It won’t see daylight until it arrives at Teesside.”

At peak production in 2020, the mine will produce more than 20m tonnes a year. From the port most the potash will be exported to China, India and Brazil and other countries with large amounts of intensive farming. Murray said the mine could also supply all of Britain’s potash demand several times over. The UK currently imports potash from Germany and Canada.

However, before work on the mine can begin Sirius needs to win approval from the park authority, which will now hold a 16-week public consultation.

The Campaign for National Parks said it was “very concerned about the negative environmental impacts of locating such a significant development in a national park”. A spokesman said the law prevented Sirius from building the mine inside the national park if alternative sites were available, and said Sirius had “not provided an adequate explanation” as to why it could not locate the mine outside the park.

Murray said it was “quite hard to find an isolated location that isn’t in the protected part of the moorland”.