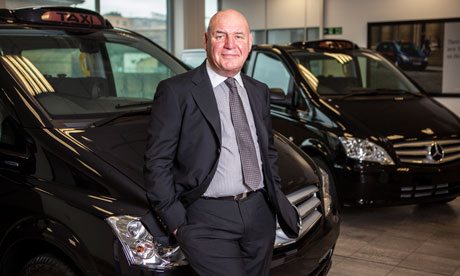 Among the many business casualties of 2012 was the company behind London’s world-famous black cabs, which collapsed into administration just two months after the Spice Girls sang and danced on top of five of its cabs in the closing ceremony of the Olympic Games, reports The Guardian.

While the company, Manganese Bronze, had plenty of its own problems, many people in the trade blame one man for its decline: Peter DaCosta, the driving force behind its only official rival. It was his company, Eco City Vehicles, that broke Manganese’s monopoly by converting Mercedes people carriers into cabs approved by the Public Carriage Office.

An ex-cabbie himself, who once drove Shirley Bassey, DaCosta insists he was not happy to witness the decline of Manganese. “When people think we are sitting here rubbing our hands together and saying yippee, we are not. I want to do the right thing for the cab trade.”

While talks were said to be continuing with possible buyers for the Coventry manufacturer, it has laid off staff and some fear its distinctive cars could disappear from London’s streets altogether.

DaCosta would be sad to see what he refers to as Manganese’s “cute cab” disappear from the road entirely, he said. “My nostalgic side of me says I hope it keeps going.” But he argues that it is not the shape of the cab that is iconic. “The taxi cab is not the icon, the driver is – and the orange light and what that orange light represents.”

As someone who did the “knowledge” – learning in detail the streets of London within a six-mile radius of Charing Cross – he maintains this, and the trust placed in black-cab drivers, is what sets them apart.

Talking to DaCosta you often have to blink to make sure you are not in the back of a cab, his voice carrying over his shoulder as he sets the world to rights, barely pausing for breath. But no, we are in an office in the east end of London with shocking purple walls and a novelty Mercedes car seat for a chair. Downstairs are cobbled showrooms – “that was my touch” – with the Mercedes Vito on display. DaCosta’s empire stretches all the way up the street to the railway arches, with a selection of garages servicing black cabs of all shapes and sizes.

As well as selling the Mercedes Vito cabs, Eco City runs dealerships for the Manganese Bronze vehicles – it provides parts for both kinds of cabs and services them all. He says again of the company’s demise: “If they want me, they know where my door is, if we can help out in any way we will help out.” Asked whether he would buy it out of administration, he will only say it is not on Eco City’s agenda.

Now 65, DaCosta entered the trade back in 1968. “My mum – God rest her soul – forced me to become a cab driver.” This tough-looking East Ender with a bald head and a boxer’s build then comes out with one of the many surprises of the interview. “If it was me, I would rather have gone into fashion, dress designing: I love all that stuff. I’m a bit of an old queen.”

Instead, in 1975, he and two partners set up a business to service the black cabs that were owned by their drivers, who were finding it harder and harder to get repairs done. Those were the days when the police still ran the Public Carriage Office and carried out rigorous checks on the black cabs, checking to see if cabbies had cleaned behind their hubcaps or swept under the floor mats.

The business progressed to include dealerships, and ultimately Eco City Vehicles. The latter was DaCosta’s brainchild; an attempt, among other things, to bring cleaner, liquefied-gas-powered vehicles to London with the help of a charitable foundation. When that plan collapsed, DaCosta set about building what he calls “the first serious hybrid vehicle”. The company built a prototype but then the recession came along. “We were leaking money at a rate of knots and I had to make a decision. I had to shelve the project.”

DaCosta had yet another plan, to topple Manganese’s monopoly. Cabs licensed by the Public Carriage Office – “the ones that you can hail legally, with the orange light” – have to adhere to strict requirements. The toughest is the maximum 7.6-metre (25ft) turning circle – said to originate from the small roundabout in front of the Savoy that taxis needed to round in one manoeuvre. Until recently, Manganese Bronze produced the only cab that achieved it. According to DaCosta there are a host of problems with the Manganese cabs, so he was intrigued when vehicle manufacturers One80 approached him with designs to adapt a car to meet the strict requirements.

DaCosta said: “I looked at it and went, I’m only interested if Mercedes-Benz are interested.” He gave a hoarse laugh. “My market research over the years was effectively my cab drivers and every time their cabs went wrong – and they went wrong many times – they all had one cry: ‘Peter, for the price of this cab, I could have had a Mercedes.’ So I thought to myself, market research done. They didn’t turn around and say I want a BMW, they didn’t say I want a Peugeot, they didn’t want a Jaguar.”

From this the Mercedes Vito black cab was born. Mercedes supplies Eco City with Mercedes-Benz Traveliners, with just a back seat and a driver’s seat. One80, which is now majority-owned by Eco City, then decks out the interior as specified by the Public Carriage Office, and adjusts the rear wheel steering to achieve the magic turning circle.

Eco City has not been immune to the crisis, with a 10% decline in sales in 2011. “Recession is not a perfume by Calvin Klein,” said DaCosta. “Like all retail businesses I think we’ve all gone through the mill.”

Soon the company will be faced with a second competitor, when Nissan launches its version of the black cab this year. DaCosta says he welcomes the competition. “It is a limited market but it makes you even more keener, doesn’t it, once it’s a limited market.” With that entrepreneurial edge, he suggests he could even be of use to Nissan, with his vast network of contacts in the trade. “I’m here for them if they want to speak to me,” he laughs. But it is clearly no joke.