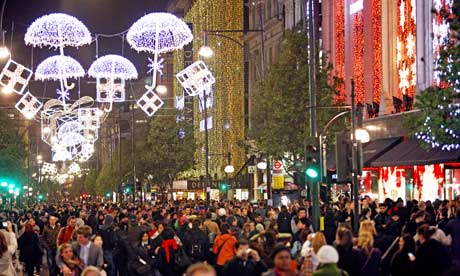 Helen Dickinson, director-general of the BRC, said the results are “not a cause for celebration, but not a disaster either”.

Total retail sales rose 1.5pc, driven by online growth of 17.8pc.
According to Ms Dickinson, retail sales would have fallen without the sharp increase in online sales.

“December has become huge for online and the most important part of the year,” she added.

“People make use of the convenience of it, particularly buying presents for people who live in other parts of the country.”

Online sales grew at the fastest pace for 12 months in December and the proportion of retail sales that came from the internet increased from 10pc to nearer 15pc during the month.

Despite the spike in online sales, the total sales growth was below inflation and only on a par with December 2010, when retailers were hampered by snow.

So far, high street retailers have reported mixed results for the pre-Christmas period. While Next and John Lewis reported growth in sales, supermarket Morrisons struggled.

According to the BRC survey, a fashion for Lego building bricks failed to prevent traditional toy sales from continuing on a downward trend before Christmas, as interest turned to tablet computers.

Electrical retailers also benefited from the demise of Comet, which closed its final stores last month, and the popularity of earmuff headphones.

The BRC said that while shoppers were cautious not to overspend on food, they tucked into canapés and festive cheeses, such as potted blue Stilton.

Champagne and salmon also sold well nearer to Christmas, but the bestsellers were festive puddings and desserts.

Ms Dickinson said: “Retailers will be hoping that a continuing boost from post-Christmas sales events strengthens January’s figures but, unfortunately, there are few signs that their sense of ‘running fast to stand still’ is likely to ease off any time soon.”

David McCorquodale, head of retail at KPMG, said: “January will be a tough month for retailers as consumers face up to their credit card bills after Christmas, and it’s likely 2013 will bring more of the same challenges.

“There will be no boom and it is likely more than a few will go bust.”

More than 300 retailers went into administration in 2012, including a number of High Street names including Comet, Peacocks, La Senza, Blacks Leisure, Clinton Cards and JJB Sports.