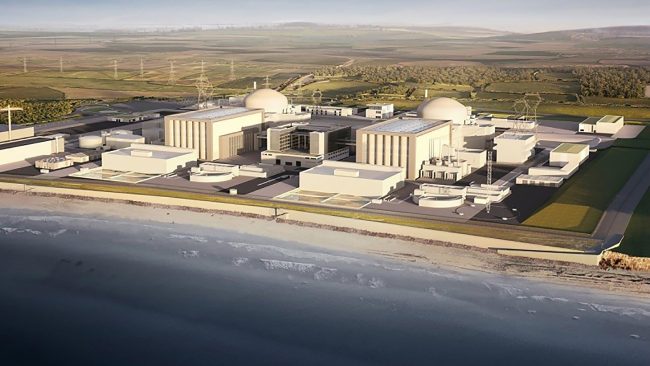 Hinkley Point C will be built by France’s EDF with £6bn of Chinese investment. It is effectively subsidised by the UK taxpayer under the terms of the guaranteed “strike price” that will be paid by consumers for the electricity generated, reports City AM.

This price is more than twice the current wholesale price of electricity, prompting the Energy Intensive Users Group to describe the subsidy as “astonishingly generous”.

Conservative MP Zac Goldsmith said the deal would produce “the most expensive energy in the history of energy generation”.

The Chinese state-backed firm that is investing in Hinkley, CGN, intends to take a majority stake in another reactor at Bradwell, in Essex. However, this has fuelled security concerns over Chinese involvement in UK strategic infrastructure.

“China has said it has ambitions to proceed with [Bradwell] but having China or a Chinese company running a nuclear reactor like that is always going to be difficult for national security concerns, so I’m not sure how you can bridge that gap,” said Alan Mendoza, executive director at The Henry Jackson Society.

The government is drawing up a range of measures to allay these concerns. Yesterday, secretary of state for business, energy and industrial strategy Greg Clark said that, after Hinkley, the government will take a special share in all future nuclear new build projects to ensure that significant stakes cannot be sold without its knowledge or consent.

There are also doubts over whether the reactors can be built in the allotted timeframe, and as to whether they can bridge the UK’s looming energy supply gap.

The new reactors are due for completion in 2023 but Whitman Howard utilities analyst Angelos Anastasiou believes a timescale of 2025 to 2030 is more realistic.

“Approval of Hinkley C is necessary but not sufficient to avoid a future supply crunch,” said Jeremy Nicholson, director of the Energy Intensive Users Group.

“We need action to ensure new gas fired power stations get built quickly during the 10 years or more that it will take before Hinkley Point is being built.”

However, the £18bn plan was welcomed by business groups as showing that the UK is open for business, particularly for foreign direct investment.

“Investors are hungry for further signs from the government that the UK is open for business. Pressing ahead with major infrastructure decisions would give a real boost to their confidence in the UK in the long-run,” said CBI deputy director-general Josh Hardie.

Institute of Directors (IoD) chair Lady Barbara Judge said: “As reliable low-carbon technology, the IoD believes nuclear has to be part of the energy mix. The government was right to review the Hinkley deal before giving it final sign-off, but the Prime Minister clearly feels that building the plant meets her strategic goals, creating skilled jobs and showing the UK is open to foreign investment.

“However, the cost to billpayers will be substantial. It will be necessary to maintain a focus on cost for future plants,” Judge added. She also said that despite the costs of the Hinkley project, the move signals a clear geo-political strategy being pursued in Whitehall.

She added: “Approving Hinkley shows that the government believes China is an important and strategic market for Britain.”

Michal Meidan, associate fellow for the Asia programme at Chatham House, warned the government may have inadvertently harmed ties with China after Prime Minister Theresa May failed to personally contact the ruling party following the decision to proceed with plants.

While May called French President Francois Hollande, her business and energy secretary Greg Clark contacted his opposite number in China.

“The UK underestimates the importance of protocol in dealing with China and that can complicate things. I don’t know how many leaders can pick up the phone and call Xi Jinping, but the Prime Minister sending a letter or maybe doing something a bit more formal would benefit those ties,” said Meidan.