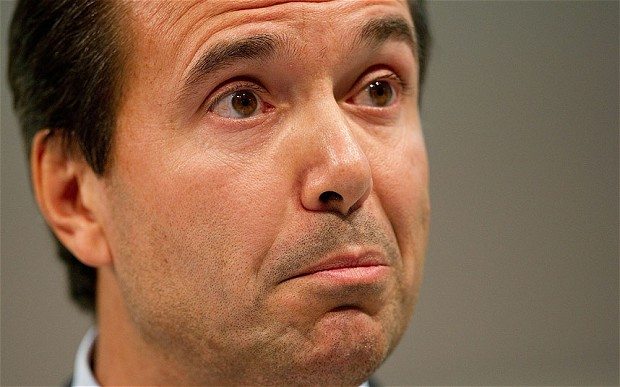 Stripping out the money set aside for the mis-selling claims, which consisted of £1.5bn for payment protection insurance and £310m for interest rate swaps, the lender said underlying pre-tax profit jumped from £638m to £2.6bn.

The additional mis-selling costs will take the total provisions to cover PPI and the interest rate swap scandal to about £6.7bn.

Despite the loss, Britain’s biggest retail bank set aside £365m to pay staff bonuses and would hand its chief executive, Antonio Horta-Osorio, a deferred share award worth £1.49m.

Mr Horta- Osorio’s will be deferred for five-years and will only pay out if the bank’s share price hits the taxpayer’s break even price of 73.6p, or if the state is able to sell 33pc of its 39.2pc in the bank for more than 61p.

Sky News reported – citing sources – that the Government plans to sell its shares in the bailed-out bank if the price reaches 61p.

Lloyds shares, which have risen 57p over the past year, closed at 54.47p last night.