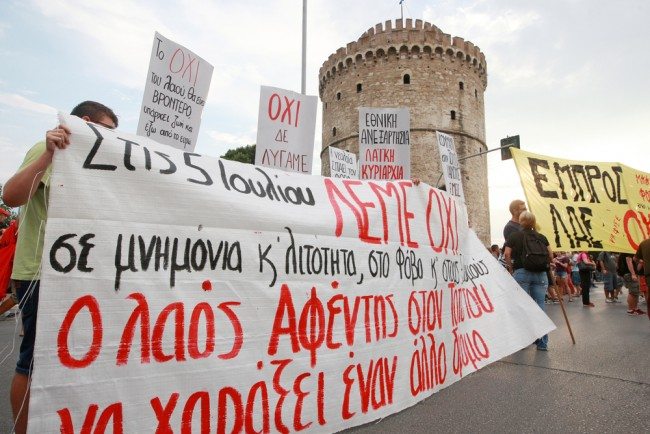 Yanis Varoufakis said he had been “made aware” some members of the eurozone did not want him at the meetings of finance ministers, according to Sky News.

He quit as the leaders of France and Germany prepared to hold emergency talks, adding: “I shall wear the creditors’ loathing with pride.”

Thousands of people waving flags and chanting “no, no, no” celebrated through the night in the centre of Athens as just over 61 per cent snubbed demands for further austerity measures.

Eyes are now on the opening of the US and European stock markets to see how they react to what is uncharted territory for the eurozone.

Leaders from the countries which make up the currency bloc are also meeting on Tuesday for an emergency summit.

Prime Minister Alexis Tsipras called the result a “victory of democracy” and said the Greek people had made a “very brave choice”.

“We proved even in the most difficult circumstances that democracy won’t be blackmailed,” Mr Tsipras said in a TV message to the nation.

He has promised to return to the negotiating table to push for better terms from Greece’s creditors – the European Union, International Monetary Fund and European Central Bank.

The government says it believes a new bailout deal could be possible with the next 48 hours.

Mr Tsipras also stressed the referendum did not necessarily mean Athens would leave the euro – polls show most people in Greece want to stay in the currency union.

“This is not a mandate of rupture with Europe, but a mandate that bolsters our negotiating strength to achieve a viable deal,” he said.

German Chancellor Angela Merkel and French President Francois Hollande have agreed that “the vote of the Greek people must be respected,” according to a spokesman.

Mrs Merkel will jet into to Paris this afternoon to mull over a strategy to avoid so-called Grexit – Greece leaving the EU and going back to the Drachma currency.

No country has ever left the 19-member eurozone.

The meeting comes ahead of another emergency summit of leaders and finance ministers from all eurozone countries on Tuesday.

EU President Donald Tusk said on Twitter: “I have called a #EuroSummit Tuesday evening at 18h to discuss situation after referendum in #Greece.”

However, some of Europe’s top politicians have already sent out ominous-sounding messages.

Jeroen Dijsselbloem, who chairs the eurozone group of finance ministers, said the vote was “very regrettable” for Greece.

Germany’s economics minister and deputy Chancellor Sigmar Gabriel said fresh negotiations are “difficult to imagine” and that Greece had “torn down the last bridges”.

“Whatever Greece decides, Britain is prepared. We have the plans in place for whatever the outcome is,” Mr Osborne told the Andrew Marr Show earlier on Sunday.

The international bailout – which has so far dished out €240bn ($170bn) in loans – expired last week.

On the same day Greece defaulted on an IMF repayment, becoming the first developed nation to do so.

Banks across the country have been closed for the past week with people only able to withdraw €60 a day from cash machines, leading to long lines at cash machines.

Greek Finance Minister Yanis Varoufakis has said the resounding No vote means they will reopen on Tuesday.

However, with no new bailout deal agreed there are worries the government could be forced to effectively “pull the plug” on the cash machines.