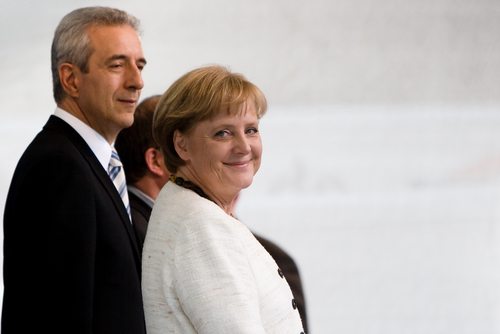 Treasury officials told Congress that internal balances within the eurozone are disrupting the global trade structure, with almost nothing being done by north Europeans states to curb their huge surpluses.

The report said Germany’s current account surplus is running at 6.3pc of GDP, and Holland is even worse at 9.5pc. Yet the countries still cleave to fiscal austerity policies that constrict internal demand, The Telegraph.

The EU’s new tool for cracking down on intra-EMU imbalances is “asymmetric” and does not give “sufficient attention to countries with large and sustained external surpluses like Germany”.
While the eurozone as a whole is roughly in trade balance, the EMU regime of austerity in the South without offsetting stimulus in the North is creating a contractinary bias, holding back global recovery.

The US Treasury said eurozone surplus states have “available room” for fiscal stimulus but refuse to act, despite repeated pledges by EU leaders that more must be done to foster growth. “They have not yet made any concrete proposals capable of yielding meaningful near-term results.”

Germany’s permanent surplus is in stark contrast to the shift under way in Asia. China has “partially succeeded in shifting away from a reliance on exports for growth”, and has slashed its surplus to 2.6pc from 10.1pc in 2007.

While the yuan remains “significantly overvalued”, China’s has stopped building reserves to hold down it currency and has seen a 40pc appreciation against the dollar since 2005 in real terms. Double-digit wage growth is closing thecurrency gap by oither means.

A chart published in the report shows that Germany has overtaken China to become the biggest single source of global trade imbalance, alone accounting for a large chunk of the US deficit.
Switzerland is top sinner with a surplus of 13pc GDP, though the report says the country faces unique circumstances as a safe-haven battling deflation.

The Swiss National Bank has bought $230bn in foreign bonds since mid 2011 to hold the franc, more than China, Russia, Saudia Arabia, Brazil and India combined.

The US Treasury’s shift in focus away from China – and towards Germany’s disguised mercantilism – reflects mounting irritation in Washington over North Europe’s “free-rider” strategy, which relies on exploiting global demand rather than generating it at home.

The US Treasury said China still needs to do more to wean itself off investment – almost 50pc of GDP – and boost consumption instead. It called for a change in the tax structure, reform of the big state enterprises, and an end to financial controls that force up the savings rate. There is concern that China’s surplus will rise again over coming years unless Beijing pushes through radical reforms.

The tone of the report is conciliatory, a far cry from the hot rhetoric of the US election campaign. Republican candidate Mitt Romney had vowed to label China a currency manipulator from “day one”, a move that would have entailed trade sanctions and an ugly turn in superpower relations.

A separate report from the International Monetary Fund said China’s excess credit growth and investment have moved into “dangerous territory” and has begun to impose major costs on China itself.

The country spending 10pc of GDP more on investment than the Asian tigers at the peak of the investment bubble before onset of the East Asian meltdown in the late 1990s.

The Fund said the excesses are unlikely to lead to the sort of sudden-stop crisis seen in Thailand, Indonesia and Korea during that episode, since those countries relied on dollar funding whereas China’s credit comes from internal savings, but there is disguised damage nevertheless. Rampant over-investment acts through complex channels as a transfer of income from families and small businesses to big state firms, distorting the whole economic system over time.

The IMF said there is little doubt that investment in plant and infrastructure has driven China’s great boom over the last thirty years but the law of diminishing returns is setting in.

“The marginal contribution of an extra unit of investment to growth has been falling, necessitating ever larger increases to generate an equal amount of growth. Now with investment to GDP already close to 50 percent, the current growth model may have run its course,” it said.