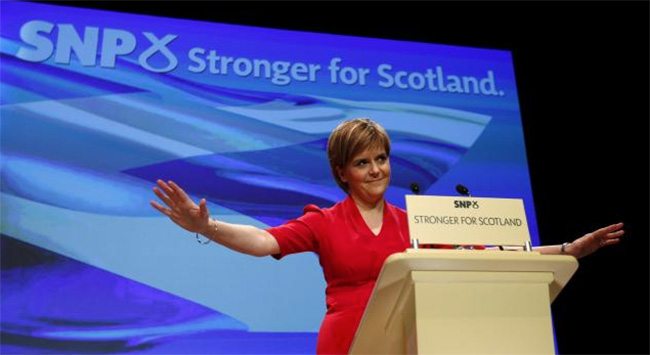 The first minister’s comments came as she was asked if plans for a fresh vote on Scotland’s future would be in her 2016 Holyrood election manifesto, reports The BBC.

Scottish Conservative leader Ruth Davidson said the SNP had ruled out another referendum “for a generation”.

Their remarks came during a BBC Scotland TV debate in Aberdeen, which is being broadcast on Wednesday evening on BBC1 Scotland and the BBC News channel.

David Cameron has pledged an in/out referendum on Europe by the end of 2017, if the Conservatives win the election.

Ms Sturgeon has previously said the Westminster election was not about independence, but during an STV debate on Tuesday added that using the 2016 Holyrood elections to bring about a second independence vote was “another matter”.

She told the BBC Scotland debate she was “not planning or proposing another referendum”, but when asked about the 2016 referendum, responded: “Something material would have to change in terms of the circumstances or public opinion before I think it would be appropriate to have a proposal for a referendum.”

Ms Sturgeon added: “Perhaps if the Tories wanted to drag us out of the European Union against our will, for example. That might change the circumstances.”

She also said it would be “completely outrageous” to “rule out forever and a day the Scottish people getting the chance to choose”.

Ms Davidson said she did not see a situation where, if another referendum was to be held, her party would block it.

But she added: “We were promised – and we would feel the betrayal very deeply – time after time after time, by Nicola, by Alex Salmond, by John Swinney, by all of her MSPs, by all her MPs, all her MEPs and all her councillors that this was – and I quote the SNP poster ‘their one opportunity’.