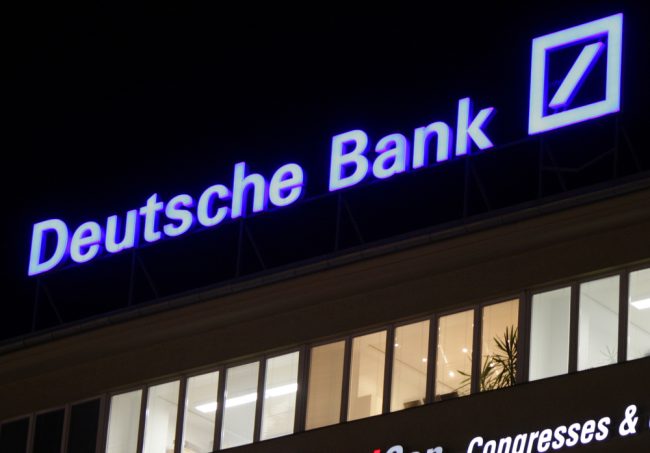 Deutsche Bank came under mounting pressure this evening after it emerged that some hedge funds worried about its financial health had started to trim their exposure to the troubled lender, sparking fresh fears about its future.

About 10 funds that use Deutsche’s prime brokerage business – a division that services hedge funds – are believed to have reduced their positions with the bank in recent days by shifting some of their derivatives holdings to different firms and withdrawing some cash, reports The Telegraph.

Although they represent a small proportion of the funds and firms that do business with Deutsche, the move, which was first reported by Bloomberg News, indicates the growing nervousness among investors about trading with the bank.  If more clients follow suit, it threatens to exert even greater pressure on the German lender, which is Europe’s biggest bank.

News of the hedge funds’ move sent Deutsche’s New York-listed shares plunging as much as 9.1pc and sparked a broader sell-off on Wall Street, with the Dow Jones Industrial Average sliding as much as 1.4pc at one point.

A Deutsche spokesman said: “Our trading clients are amongst the world’s most sophisticated investors.

“We are confident that the vast majority of them have a full understanding of our stable financial position, the current macro-economic environment, the litigation process in the U.S. and the progress we are making with our strategy.”

Investors have taken fright after the US Department of Justice proposed hitting Deutsche with a $14bn fine for selling toxic mortgage securities in the run-up to the financial crisis.

Deutsche’s shares have plummeted amid fears the penalty could lead to the bank’s collapse.

Concerns are also growing about the state of Germany’s other banks. Struggling Commerzbank today outlined plans to cut 9,600 jobs, the equivalent of one in five roles, and suspend its dividend in an attempt to radically restructure its business.