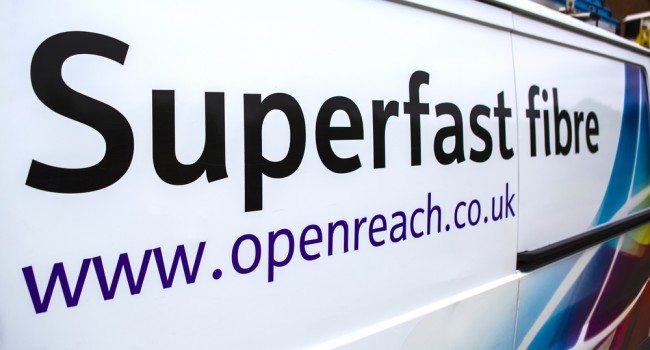 BT has been accused of fudging its figures to avoid penalties over the installation of fibre-optic cables after the telecoms regulator launched an investigation into its excuses when it fails to connect lines in time, reports The Times.

Openreach, the engineering division of BT, is set stringent targets for completing the installation of fibre-optic cables for consumers and those needed by BT’s rivals to run superfast broadband services for businesses and to link mobile phone towers to the main network. It is claimed that BT is using a loophole to mask its failings and avoid penalties by boosting its numbers.

That, according to Vodafone, has slowed down the roll-out of 4G services and led to substantial delays in connecting businesses to faster broadband networks. It has complained to Ofcom, which has opened an investigation under the Communications Act.

Openreach is allowed to stop the clock on an installation when an issue arises that is out of its control, such as when engineers cannot complete an order because of bad weather or, say, when they cannot reach a mast on a farmer’s land because a gate has been locked. Such instances are not counted in Openreach’s service performance.

Vodafone has told Ofcom that BT is abusing this provision to hide problems of Openreach’s own making. It said that the engineering arm cites issues such as a lack of available engineers, design and planning problems and a failure to close roads at the right time as reasons. It has even cited an example where an Openreach engineer failed to connect a line because he had forgotten his boots and could not cross a muddy field.

“We welcome Ofcom’s decision to open this investigation, believing it is necessary to stamp out unacceptable practices by Openreach and hold them to account for their own service failings,” a Vodafone spokesman said.

Vodafone could seek millions of pounds in compensation if Ofcom rules in its favour, and also wants the regulator to take greater oversight in the market for ethernet — or business-grade fibre lines — to stop Openreach choosing what is outside of its control.

BT said that it was aggrieved that Vodafone had decided to go to the regulator with its concerns. “This is a very detailed contractual dispute and we’ve been talking to Vodafone to try resolve this without the need for Ofcom intervention,” a spokeswoman said. “So we’re disappointed they’ve chosen to raise this as a regulatory dispute, especially as Ofcom is consulting on the broader issues as part of its business connectivity market review. Alongside this, Openreach is discussing a new set of industry processes and service levels for this market with Vodafone and other service providers.”

Vodafone has calculated that 71 per cent of all orders for ethernet products completed by Openreach were delayed, with new fibre builds rife with service issues between 2011 and 2014.

Ofcom said that only 45 per cent of all ethernet commissions were connected on time last year, although that number could include legitimate delays to installations.

The issue has wider implications for the industry, with calls for Openreach to be split from BT reaching fever pitch. Ofcom is expected to publish the findings of a wide-ranging review of the market by the end of the year that could recommend a full separation of the engineering business so that it becomes an independent company focused on upgrading its network and improving service levels.

BT is acquiring EE for £12.5 billion, and Vodafone and its rivals fear that Openreach resources could be diverted to supporting the company’s new mobile arm at their expense. BT has dismissed those concerns, arguing that Openreach is a highly regulated and independent network company.