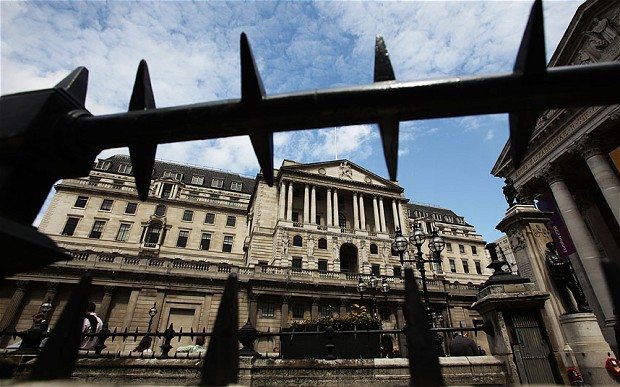 Its “vulnerable” forecasting processes also lack detail and have become “noticeably worse” since the onset of the financial crisis, the reviews said.

But the central bank was praised for its “effective” actions at the height of the economic collapse.

The three reviews into the BoE’s performance and capabilities were commissioned in May by the Court of the Bank of England, which manages the affairs of the bank but does not deal in monetary policy.

They focused on the Bank’s handling of emergency lending at the height of the financial crisis, its forecasting record and its ongoing plans for providing support to the banking sector.

The reports were completed in October and released today after being discussed at a meeting between BoE officials, reports The Telegraph.

Andrew Tyrie, the chairman of the House of Commons’ Treasury Select Committee, said the reports were a step forward, but we were too limited in scope and had taken too long, reflecting problems with governance at the bank.

“What we needed was a full investigation and we needed it earlier,” he told Radio 4’s Today programme on Friday.

Former investment banker Bill Winters, who sat on the Independent Commission on Banking, questioned the “robustness” of internal BoE governance in his review.

Calling into question the bank’s “centralised and hierarchical” system, he said that less senior BoE staff had “a tendency to filter recommendations in such a way as to maximise the likelihood that senior staff will find the recommendation palatable”.

He said: “While this makes it easier for the Governor, as ultimate decision-maker, to reach conclusions, it risks reducing the range of views he sees and, as such, might lead to a less effective overall outcome.”

His report, which focused on the bank’s framework for providing liquidity to the banking system, did acknowledge that less senior staff did “regularly undertake significant in-depth analysis of a wide range of policy options, and are often willing to challenge the views of their superiors”.

Mr Winters also raised the issue that some financial institutions were reluctant to access the BoE’s liquidity facilities. He said some programmes, in particular the Discount Window Facility, were “stigmatised”, meaning that banks would only access them “in very extreme circumstances fearing market, regulatory or political consequences should their use be known”.

Ian Plenderleith, chairman of investment company BH Macro and a former Bank of England official, looked at the supply of emergency cash to the banks at the height of the financial crisis in 2008/09.

He concluded that the BoE “achieved its purpose effectively” when it extended billions of pounds in emergency liquidity assistance (ELA) to HBOS and The Royal Bank of Scotland.
He also said the bank did the right thing when it kept the operations secret from the public and much of its governing board until late 2009.

In the report, Mr Plenderleith added that the Bank’s measures were “essential” in providing an element of stability back to the financial markets.

He said: “The bank’s ELA operations did not in any sense resolve the financial crisis. Nor could they have done so, on their own.

“But they were an essential plank in the structure of official support that was able in the end to return the financial system to a degree of stability.”

Taking a more critical stance, Mr Plenderleith, a former member of the bank’s Monetary Policy Committee (MPC), suggested there was greater focus on systemic risks in the run-up to the financial crisis rather than on the vulnerability of individual banks.

He also identified an “underlap” in the City’s regulatory structure that meant the Bank was dependent on the Financial Services Authority for information on individual banks’ cashflow, which did not contain enough detail.

In a series of recommendations he said the bank should extend its ELA to non-bank financial institutions.

The final report, by David Stockton, the former statistics chief at the US Federal Reserve, probed the MPC’s forecasting methods.

He said the events of the last five years has revealed some “vulnerabilities” in the bank’s processes, adding they are not as accurate as those made by some external forecasters.
He also concluded the MPC’s forecasting performance had become “noticeably worse” since the onset of the financial crisis.

Describing the forecasting tools used by the bank, the report said: “The financial crisis exposed virtually all major macro models as being woefully ill-equipped to understand the implications of this type of event, and the Bank’s current forecast model has very limited financial detail.”

Mr Stockton recommended there should be more “entry points” for a range of alternative views into the bank’s forecast process.

He also called for greater transparency, saying other central banks have pushed farther forward in increasing the quality of their transparency and communications

The court’s chairman Sir David Lees said: “When we commissioned the three reviews last May we had two particular objectives in mind.

“First, to learn practical lessons from past experience. Second, to examine ways in which the Bank may deliver more effectively its increased responsibilities in the future.

“The reviewers have provided us with a large number of constructive recommendations and options for further consideration.”

Welcoming the reviews, Sir Mervyn King and deputy governors Charlie Bean and Paul Tucker said: “The reviewers have given us an independent perspective on some of the key challenges the Bank has faced in responding to the financial crisis and have given us a great many ideas to consider that could improve the Bank’s performance.

“We are starting programmes of work to evaluate the recommendations and to plan changes.”

The bank’s executive will respond to the recommendations made in the reports early next year.