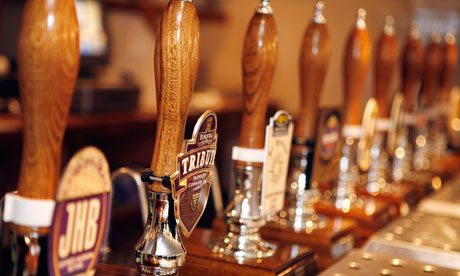 Beer sales are buoyant again after years of decline. The UK drank 31 million more pints between April and June than in the previous three months, according to figures from the British Beer and Pub Association.

The Euro 2016 football championships gave off-licences and supermarkets a boost, as fans stocked up on booze to drink at home, the BBPA said in its quarterly ‘Beer Barometer’ report. Sales rose by 4.8 per cent, reports The Independent.

Pubs, bars and restaurants fared less well, with sales falling slightly to 1.9 per cent. However, the drop was the slowest in recent years.

Beer sales have risen by 1.2 per cent over the past year, and have been relatively stable since early 2013 following almost a decade of decline.

The marked change in trend coincides with reductions in beer duty, which began with a pioneering one penny cut in the March 2013 Budget, the BBPA says. This was followed by two further 1p cuts and a freeze this year, putting an end to years of beer tax increases.

Increased confidence in the sector has been accompanied by greater investment. The industry launched a £10 million campaign to reignite Britain’s waning passion for beer called “There’s a Beer for That,” in 2014.

“These are yet more encouraging figures, and the football has given a real boost to sales,” said Brigid Simmonds, BBPA chief executive.

“It is quite clear we owe a huge debt of thanks to the cuts in beer duty from 2013. I hope the Government continues with this pioneering change in approach, and we continue to see support for fairer taxes for British beer.”

David Cunningham, programme director of Britain’s Beer Alliance, added: “We can see that the campaign messages of quality, diversity and versatility of beer and our focus on encouraging people to pair different styles of beer with their meals, is beginning to have a positive impact.”

For years British drinkers have been moving away from beer and turning to wine and alcopops. The reverse in fortunes for beer sales coincided with surprisingly strong economic growth of 0.6 per cent over the three month period.