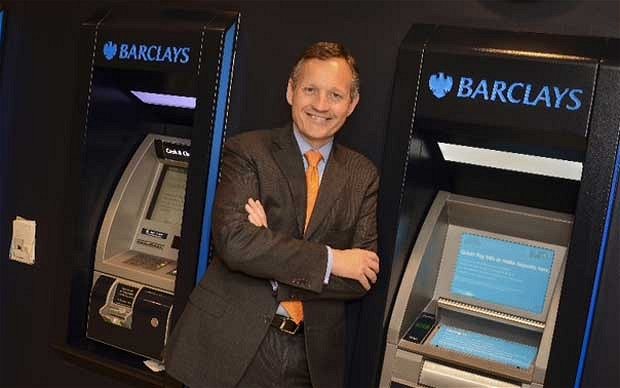 Antony Jenkins, the new boss of Barclays, is on day two of a five-year journey to turn Barclays into the “go to” bank. It will not be the destination for the tax avoidance products of the past, but for good service from staff who are less motivated to make profits and are encouraged to treat customers with respect.

Day one involved presenting the outcome of a review of 75 business lines which led to the closure of the structured capital markets business – dubbed a machine for “industrial scale tax avoidance” by former chancellor Lord Lawson – and a withdrawal from speculating on food prices, reports The Guardian.

Day two began on Wednesday at a breakfast meeting with 40 hand-picked representatives from charities, NGOs and City organisations before a presentation to staff in the bank’s Canary Wharf headquarters about his mission to transform Barclays. Jenkins, fond of management jargon, uses “transform” to stand for three elements of a plan – Turnaround, Return Acceptable Numbers and Sustain Forward Momentum – that he expects will restore Barclays’ reputation in the wake of the Libor rate-fixing scandal.

Surrounded by leather-bound books in the library of the Royal Institution in Mayfair, Jenkins looked more at ease than he did presenting his strategy to the City and media the day before.

He tackled subjects as varied as the bank’s approach to financial inclusion to micro-finance in Africa. There was no mention of the “citizenship day” some of them attended last May which he fronted alongside his predecessor Bob Diamond, weeks before the Libor scandal pushed out the American banker and opened the door to Jenkins’ promotion from running the retail bank.

One question, from Christine Farnish, a former Barclays employee and now chair of the Consumer Focus watchdog, summed up the difficulty of his job. “What about the huge challenge in building a single Barclays culture?” she asked. Tony Greenham of the New Economics Foundation thinktank, and also a one-time Barclays investment banker, argued that the investment banking arm, where the rigging of the Libor interest rate took place and tax-avoidance schemes were thought up, should be spun off.

John Walker, national chairman of the Federation of Small Businesses, told Jenkins of the plight of one his members who had to make three staff redundant because of the cost of an interest swap product sold by Barclays. The bank has now taken provisions of £850m to pay compensation for these products.

Jenkins, who admits he played a part in mis-selling payment protection insurance, defended the “socially useful” role of investment banks in helping companies raise money to grow or protect their exposure to currency movements.

“Investment banking in itself is hugely valuable to society when it does it the right way,” Jenkins said. When it gets it wrong it proves costly. TheOrganisation for Economic Co-operation and Development warned on Wednesday that avoiding tax was “a threat to democracy”.

While Jenkins will not say precisely how much money Barclays had made over the years from helping companies avoid tax through intricate schemes, it is thought to have run to billions of pounds. The schemes are so complex it could take years for the structured capital markets division to be run down completely. And despite the pledge to shut it down, the bank does not deny “efficient tax planning” remains a part of the business with its top specialist Graham Wade remaining with the bank.

So far, the City has been relieved by the outcome of Jenkins’ review of 75 business lines, although campaigners for banking reform need more convincing that cultural change can be achieved. The lucrative investment bank, which generates 60% of profits, survives. This, along with a promise to pay out 30% of its profits as dividends and a cost-cutting plan which will cause 3,700 job losses, helped raise the share price to its highest levels in two years this week.

Jenkins told staff it was now time to get started on transforming the bank. “It’s a call to action,” he said.

It is understood that his messages are not always well received by staff. Some in the investment bank are reported to have jeered during a session on cleaning up the culture. Jenkins insists he has a “good personal relationship” with Rich Ricci, head of the investment bank and a former lieutenant of Diamond.

One of the ways he intends to change the culture is to alter the way bonuses are handed out. From the middle of next year staff will be measured on the basis of a “balanced score card” against his five values of respect, integrity, service, excellence and stewardship. This need not mean smaller pay packets – even by City standards the bank is known for generous pay deals – but ones that are not based entirely on generating profits.

Such values can be found in any management manual, including the one set out by Ken Lay, chairman of the collapsed energy company Enron. It has sparked cynicism about whether Jenkins can change an organisation where he has worked for six years.

“I understand the cynics and the sceptics,” said Jenkins. “I use it as an energy to drive me forward. I also know we are not going to change anything if we are cynical and sceptical.”

He was asked by one of his breakfast guests how his success should be measured in five years’ time. He cited better customer service, high levels of colleague engagement and shareholders happy with the returns they were receiving.

“If we achieve those three things I think that would be a success – it’s a long journey,” he said.