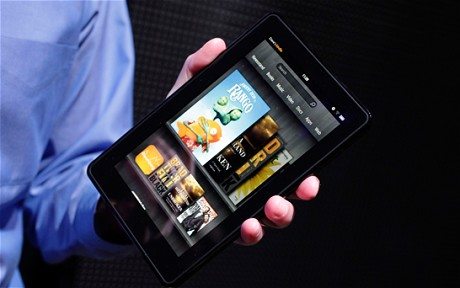 The jobs are part of Amazon’s plan to open three new warehouses in the UK by 2015.

The boost for Britain came as Amazon sharpened its assault on the stranglehold that Apple’s iPad has on the market for the tablet devices that are ousting traditional desktop PCs. Chief executive Jeff Bezos launched two new HD versions of the Kindle Fire device, one with a 7 inch and one with an 8.9 inch screen.

UK consumers will be able to buy the device, which will also come equipped with a faster processor, with the 7 inch screen for £159 next month. Amazon declined to say when the 8.9 inch screen will be available in Britain reports The Telegraph.

Amazon is stepping up its effort in a market that Google is entering this year with a device known as the Nexus 7. Microsoft is also expected to introduce a tablet called the Surface later this year.

Amazon’s strategy has so far been to make the device as cheaply as possible and reap profits when people download content such as books, music and film onto them.

“We want to make money when people use our devices, not when they buy our devices.” Mr Bezos insisted today at the launch in Santa Monica, California.

Shares in Amazon closed up 2.1pc at a record $251.38 in New York, and analysts said that the price of the devices increases the competition on Apple and Google.

However, Amazon faces an uphill fight to wrestle share from Apple, which controlled 68pc of the global tablet market in the first quarter, according to research firm IDC. Apple is expected to launch a cheaper and smaller version of the iPad by the end of the year, and some dismissed the threat posed by Amazon’s improved devices.

They “will do little to halt the momentum of Apple’s iPad franchise that continues to gain momentum around the world,” said Brian White, an analyst at Topeka Capital in New York.

Coimmenting on the announcement the Prime Minister, David Cameron, said: “I am delighted that Amazon will create thousands of new jobs. This is great news, not only for those individuals who will find work, but for the UK economy.

“This shows that the UK has the infrastructure and talent to continue to attract major investments from leading companies such as Amazon.”