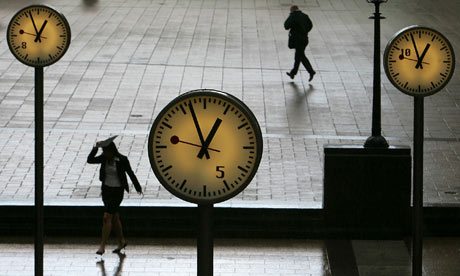 A survey of 3,000 small companies across the six countries found that British entrepreneurs have the shortest working weeks, clocking up an average of 38.5 hours a week, while Germans have the longest, at more than 47 hours.

Surprisingly, British companies also reported being less adversely affected by red tape than business owners in any of the other countries featured in the survey.

The research by Hiscox also found British business owners are among the most satisfied with their lot – more than half said they were happier running a small business than working as an employee in a larger company. This compared with an average of just 39 per cent. Dutch respondents, however, reported the lowest stress levels.

Most entrepreneurs reported slightly improved optimism about their prospects compared with when Hiscox ran the survey last year, with 47 per cent of British businesses expecting an improved 12 months of trading compared with 40pc last year.

Bronek Masojada, chief executive of Hiscox, said: “Despite a year of deepening economic gloom, most [small businesses are] displaying more optimism. The resilience and self-belief within SMEs are evidenced by renewed commitment to work more efficiently and seek new opportunities. In five of our six countries, a substantial majority of respondents reported gains in new customers.”

However, optimism declined sharply among small businesses in France and Spain, and stress levels remain high. One in three of all respondents said they had trouble sleeping, and a quarter said they feared bankruptcy. In Spain, this rose to 53 per cent.

A quarter of British entrepreneurs said they had abandoned plans or put them on hold because of the eurozone crisis, compared with 37 per cent Germany and 76 per cent in Spain.