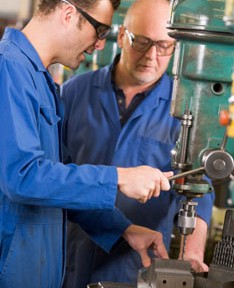 A survey carried out by Clydesdale Bank, which questioned more than 1,000 UK businesses, shows that more than 40 per cent of UK businesses operate an apprenticeship scheme, with around a third of those expecting to increase the amount of apprentices they employ this year.

While around a third of UK businesses expect overall staffing levels to remain flat this year, the vast majority of businesses agree the use of apprentices is a good way to develop new talent.

Colin Fyfe, divisional director for Clydesdale and Yorkshire Banks, said: “For decades many UK businesses have used apprenticeship schemes as a vital way of transferring skills and offering alternative routes to employment for young people, particularly in sectors such as manufacturing and service-based industries.

“With more young people now choosing not to go to university but looking to tackle the world of work early, it is important this young talent is captured by UK businesses.”

Official figures issued by the Office for National Statistics show that applications for UK universities last year dropped by nearly 9 per cent, largely due to the introduction of higher tuition fees. Youth unemployment currently stands at 22.5 per cent, the highest percentage since records began in 1992.

However, according to the Department for Business, Innovation and Skills, last year more than 457,200 apprentices started new schemes, a 63 per cent rise on the previous year.

Colin’s comments come shortly after a Government announcement which pledged £3.5m to help train 1,000 new apprenticeships in energy efficiency positions. A House of Commons select committee is also examining how SMEs can best use apprenticeship schemes while the Apprenticeships and Skills (Public Procurement) Bill is being considered by MPs which will require certain public procurement contracts issued by public bodies to include a commitment by the contractor to provide apprenticeships and skills training.