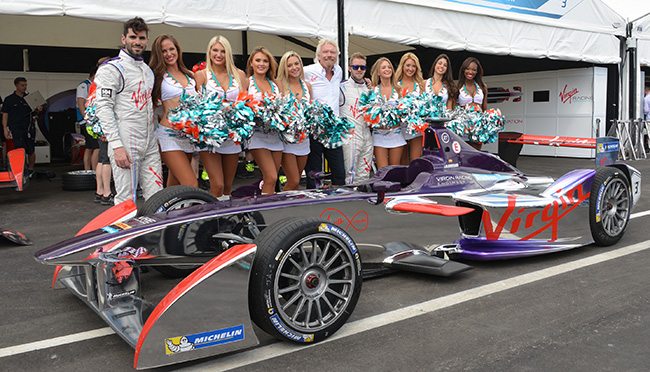 Branson, publicity-loving entrepreneur who loves fast things has been in Miami, where his Virgin Racing team competed in the all-electric Formula E race. It’s a Formula 1 spin-off that features battery-powered race cars capable of going from zero to 60 miles per hour in three seconds.

“We have teams of people working on electric cars,” Branson said. “So you never know—you may find Virgin competing with Tesla in the car business as we do in the space business. We will see what happens.”

Formula E is the world’s first international, all-electric racing event. It’s purpose is to push the edges of electric-cars technology in races from Beijing to Monte Carlo. The cars are virtually silent, at least when compared to the roar of Formula 1. But while they’re fast off the start, right now they max out at 160 miles per hour.

Branson isn’t the only one flirting with electric cars. As we reported last week Apple has been working secretly on an electric vehicle, which may be ready for production as early as 2020, but may jump ahead by actually acquiring Tesla. Google is also building a car that drives itself and nearly every major carmaker either has an electric vehicle in production or is working on one from the Nissan Leaf to the Aston Martin EB10.

However it is Tesla that is setting the standard for electric-vehicle innovation and even Branson who usually tries to trade on ‘sexy’ admits it: “Tesla is as sexy as any other car on the road today.”