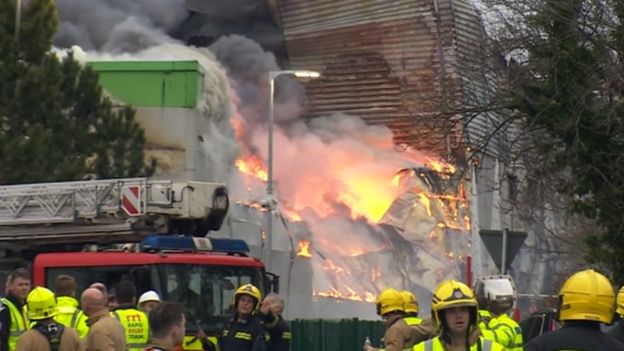 Online delivery firm Ocado has revealed that the fire which ripped through its Andover warehouse in February cost £110m.

The company has already claimed millions of pounds back from its insurers and eventually expects to be able to reclaim all the cost.

Even so, the cost of the fire in Hampshire drove it to £142.8m half-year loss and knocked 2% off its sales.

But the company said it was optimistic about its outlook.

“We have never had as many opportunities to grow as we do today,” said Tim Steiner, Ocado’s chief executive.

Earlier this year, the company clinched an agreement with Marks and Spencer to give the retailer a home delivery service for the first time.

Mr Steiner said the business was also looking for other ways to use its software and robotics expertise.

“In the last six months the centre of gravity at Ocado has shifted,” he said.

Deals have been signed with Coles of Austrialia and Sobeys in Canada to develop delivery facilities.

At the same time, its original home delivery arrangements with supermarket chain Morrisons are being scaled back.

The first half loss included a £98.5m hit from the cost of the fire, after claims from the insurer were received.

The company preferred to focus on an adjusted measure of its performance in the first half of the year, which showed a £43m loss – wider than the £13m loss a year earlier.

The fire in Andover – which stretched over four days – will cause £15m of disruption in the remaining six months of the financial year.

The company also said that its financial performance would be knocked by £10m of share-based bonus payouts to its management..

The warehouse in Andover is being rebuilt and construction of another facility in Purfleet, Essex is to begin shortly.

“The bar will be set increasingly high as its partnerships fully come into force, with the hope that the projected revenues are fulfilled.

“The shares have had something of a difficult ride of late, having dipped 17% over the last quarter, although over the last year they remain 15% ahead, as compared to a 2% dip for the wider FTSE 100,” he said.