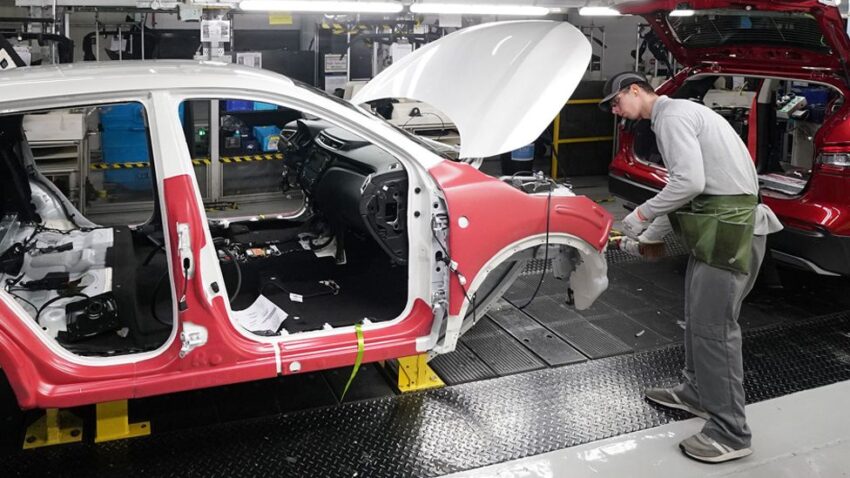 Nissan has announced a major expansion of electric vehicle production at its car plant in Sunderland which will create 1,650 new jobs.

The Japanese carmaker says it will build its new-generation all-electric model at the site.

The new electric vehicle hub, launched with £1bn worth of investment, will also support thousands of jobs in the UK supply chain.

Of that £1bn, Nissan said it would invest up to £423m to produce a new-generation all-electric vehicle in the UK, building on the success of its existing electric car, the Leaf.

Production of the new model will create 909 new jobs and more than 4,500 in its UK supply chain.

Other production locations have not yet been confirmed. More details about the new vehicle will be released closer to the car’s launch date.

Envision’s new gigafactory will eventually provide batteries to power up to 100,000 Nissan electric vehicles a year. It will create new 750 jobs and secure 300 existing roles.

It is hoped the new plant will operational in time for 2024, when the level of UK-made components in cars manufactured in the UK is required to start increasing, in line with the terms of the UK’s trade deal with the EU.

The majority of Nissan’s Sunderland-assembled cars are sold in the EU.

From 2030, sales of new cars and vans powered solely by petrol or diesel will be banned in the UK. However, some hybrids will still be allowed.

Prime Minister Boris Johnson said: “Nissan’s announcement to build its new-generation all-electric vehicle in Sunderland, alongside a new gigafactory from Envision-AESC, is a major vote of confidence in the UK and our highly-skilled workers in the North East.

“Building on over 30 years of history in the area, this is a pivotal moment in our electric vehicle revolution and securing its future for decades to come.

“Commitments like these exemplify our ability to create hundreds of green jobs and boost British industry, whilst also allowing people to travel in an affordable and sustainable way so we can eliminate our contributions to climate change.”

The government is contributing to the cost of the expansion, but a precise figure has not been disclosed.

Mike Hawes, chief executive of the Society of Motor Manufacturers and Traders (SMMT), said the announcement was “great news for the sector, the region and all those employed locally”.

“It also demonstrates the UK automotive industry’s commitment to net zero and that the transition to these new electrified vehicles can be ‘made in Britain’.”

Earlier this week, a report commissioned by the SMMT said a series of factories producing electric car batteries must be built in the UK to secure the future of the country’s automotive industry.

It said the government should announce a “binding target” of 60 gigawatt hours of battery capacity to be in place by 2030.

The SMMT-commissioned study, written by policy and research company Public First, also called for the installation of at least 2.3 million charging points nationwide before the end of the decade.

This is aimed at giving confidence to drivers – particularly those with no off-road parking at home – to invest in zero-emission vehicles.