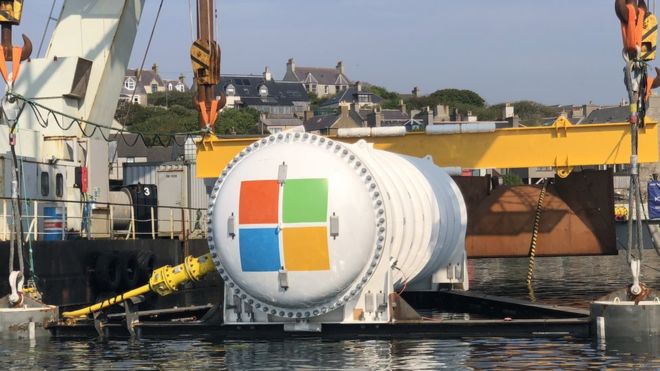 Microsoft has sunk a data centre in the sea off Orkney to investigate whether it can boost energy efficiency.

The data centre, a white cylinder containing computers, could sit on the sea floor for up to five years.

An undersea cable brings the data centre power and takes its data to the shore and the wider internet – but if the computers onboard break, they cannot be repaired.

Orkney was chosen because it is a major centre for renewable energy research.

The theory is that the cost of cooling the computers will be cut by placing them underwater.

“We think we actually get much better cooling underwater than on land,” says Ben Cutler, who is in charge of what Microsoft has dubbed Project Natick.

“Additionally because there are no people, we can take all the oxygen and most of the water vapour out of the atmosphere which reduces corrosion, which is a significant problem in data centres.”

It will not be possible to repair the computers if they fail, but the hope is that there will be a lower failure rate than on land.

This is a tiny data centre compared with the giant sheds that now store so much of the world’s information, just 12 racks of servers but with enough room to store five million movies.

Microsoft’s first experimental underwater data centre, sunk for five months in 2015, was dubbed Leona Philpot after a character in an XBox game.

If Project Natick proves a success, Microsoft envisages sinking groups of five of these cylinders and being able to deploy a data centre offshore in 90 days, whereas it could take years on land.

The operation to sink the Orkney data centre has been an expensive multinational affair.

The cylinder was built in France by a shipbuilding company, Naval, loaded with its servers and then sailed from Brittany to Stromness in Orkney. There, another partner, the European Marine Energy Centre (EMEC), provided help including the undersea cable linking the centre to the shore.

The presence of EMEC, with its expertise in renewable energy and its knowledge of the seas around Orkney, was one factor behind Microsoft’s decision to choose this location.

The Orkney Islands were early adopters of wind energy. And EMEC has been experimenting with tidal and wave energy for 14 years, with one of its test sites on the beach where the Project Natick cable comes ashore.

Now, the Project Natick team will monitor the data centre for the next five years. It could turn out to be a signpost to the future – or maybe just a tourist attraction for passing fish.