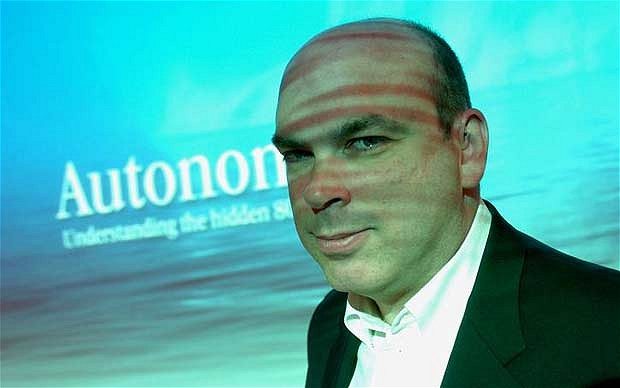 HP said it was “extremely disappointed” that Autonomy had appeared to have “inflated” the value of the company prior to the takeover which led to a $5bn (£3.1bn) charge in its latest quarterly accounts.

“These efforts appear to have been a wilful effort to mislead,” HP said.

HP is avoiding calling it a fraud, but says there were “serious accounting improprieties, disclosure failures and outright misrepresentations at Autonomy Corporation PLC.”

The revelation is another blow for HP, which is struggling to reinvent itself as PC sales shrink.

The total one-off charge recorded in HP’s accounts for the three months to the end of October was $8.8bn, pushing the company to a $6.85bn net loss.

At the time of the sale the deal raised eyebrows in the City and among HP investors, who had called Autonomy’s valuation into question.

Before its sale to HP, Autonomy CEO Mike Lynch had a terse relationship with some analysts over the worth of the company he founded, which specialises in complex pattern recognition software that allows it to search “unstructured data” such as voicemails.

Lynch, who held around 8 per cent of Autonomy, received more than $800m in the deal.

However, the acquisition drew criticism from HP investors with the computer giant’s then chief executive Leo Apotheker, left shortly afterwards, with Lynch followed in May this year after Autonomy fell short of expectations.

HP’s chief executive Meg Whitman said its revenues had been “very disappointing” and that Autonomy had been suffering from “classic entrepreneurship challenges”.