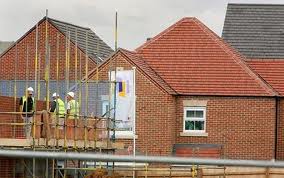 The Labour leader’s ultimatum was stark enough: “We will give developers a very clear message – either use the land or lose the land.” And the reactions were just as sharp. “The declaration is a Stalinist attack on property rights,” said Graeme Leach, chief economist at the Institute of Directors. On Twitter, there was more than one reference to Robert Mugabe too.

What did Miliband mean? Britain’s biggest property owners include the Crown Estate, the Church of England and the Ministry of Defence, not to mention the Queen herself. Supermarket groups, including Tesco and Asda, have large landbanks too. Would a Labour government send storm troopers round to seize their assets?

While Miliband may want to take a wrecking ball to the principles of private property, his first target is the housebuilding industry.

George Osborne’s Help to Buy and Funding for Lending schemes have boosted demand for houses but haven’t done much to help supply. And as prices have risen, the old accusations of hoarding have returned, reports The Telegraph.

In Brighton, Miliband laid out radical solutions. He vowed to build 200,000 new houses every year during the next Parliament and appointed Sir Michael Lyons, a former BBC Trust chairman, to help form the new legislation. Miliband said he wanted to give local councils extra powers both to charge developers for not building on land and to issue compulsory purchase orders on land banks.

Unlike energy bosses, housebuilders were more baffled than angry. Stephen Stone, chief executive of Crest Nicholson, said Miliband was “right to recognise that more housebuilding is needed.” But he warned that the policy idea was misguided.

“Housebuilders want to get going on any land that’s got planning and is viable,” he said. “It’s only land that will cost more to develop than sell that ever sits around. It won’t make any difference if the government grabs it.”

According to the Local Government Association, there are 400,000 plots, or houses, with planning permission that have not been built. But experts say of these, at least half are under construction, leaving around 200,000 – or just a year’s supply, under Miliband’s target.

A study of landbanks by Savills last month said there was no evidence of hoarding: permissioned land held by the top eight housebuilders fell by 100,000 plots between 2007 and 2012 while developers are now “working through their land banks more quickly than at any time since 2007/8.”

However a report, “Barriers to Housing Delivery”, by Molior London for Boris Johnson revealed that 45pc of the permitted homes in the capital are in the hands of “non-builders”.

Some are owner-occupiers but far more are owned by investment funds, private developers who do not build, historic landowners and the Government itself. “Site-by-site interviews suggest the obvious,” said Molior in its report. “Builders intend to build their sits, non-builders do not.”

Miliband may find it hard to legislate for them all. Instead he would do better to persude them to build themselves. Experts have urged him to focus on overhauling Britain’s bureaucratic planning system instead.

The IoD’s Leach called for Labour to ditch its “statist” plans. He said: “The fundamental problem with the housing market is the public-sector planning system, not private-sector builders.”