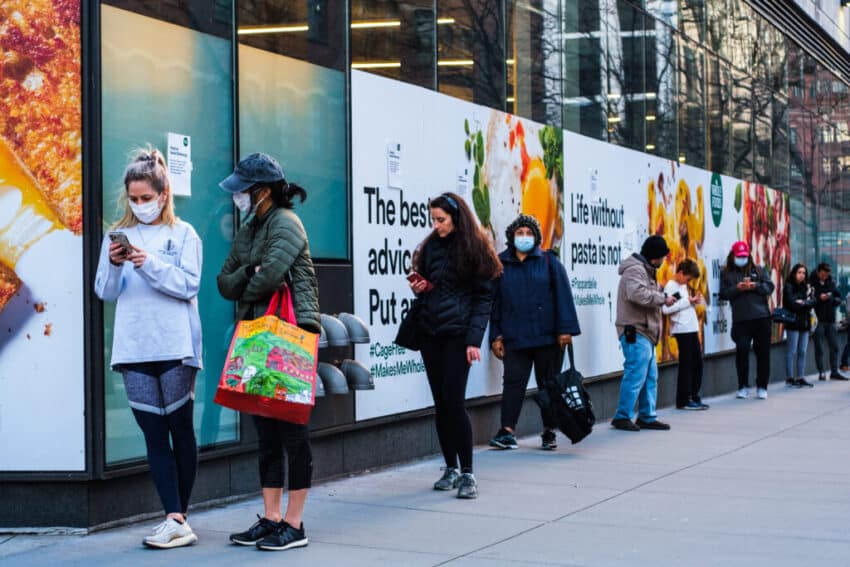 High street shops will be allowed to stay open until 10pm when the lockdown restrictions are eased and Rishi Sunak is urging people to “go have fun” and spend money.

Robert Jenrick, the communities secretary, announced that to help the economic recovery there would be no requirement for shops to fill out extra paperwork. Retailers usually need council permission to open after 7pm.

Sunak urged people to “get out there” and spend their money when shops, pubs and restaurants reopened on April 12. The extended shop opening hours will apply in England from Monday to Saturday. The chancellor said that people could “do their bit” by spending savings that they had built up during the lockdown on businesses in their local high streets.

The government will begin the first phase of easing lockdown restrictions on Monday, when people in England will be able to gather outside in groups of six and outdoor sports venues open.

Britain’s record March temperature of 25.6C could be broken next week as the country enjoys a mini-heatwave but the public are being warned not to behave as if everything is back to normal. Martin Hewitt, chairman of the National Police Chiefs Council, urged people to abide by the staged process of easing the lockdown and “not to try and pre-empt it”.

Hewitt said that the changes on Monday were not a return to normal life and that there would be a “real danger” of increased infection if the public ignored the restrictions.

He said he was “desperate to get back to a life where we have all of our freedoms”, but that point had not been reached. People were also warned against taking the approach that “I’m only breaching it a little bit”. Police will continue to hand out fines where they are necessary.

Restaurants, pubs and cafés in England can reopen for outdoor service from April 12 and outdoor holidays in self-catered accommodation will also be allowed.

Sunak said that wealthier people who had saved money were ready to go out and spend. “We know both from our experience and looking around the world that actually, once you reopen things, people will get out there and do what they do best, which is go have fun,” he told the Conservative spring forum.

“There is a lot of excess savings and if some of that gets spent that would be great to help drive growth. But also just people getting back to normal will be very beneficial. We are ultimately a consumption-led economy . . . driven by people going out and shopping and seeing their friends and going out to theatres and things. So it’s important for us to get back to that.”

Sunak said that lockdown had increased the public’s connection to their local communities. “People will feel that, when they can, they will want to do their bit to go and support the businesses they love in their towns and villages,” he said.

The Office for Budget Responsibility said last month that households had accumulated £180 billion in savings in the past year and suggested that there could be a “degree of euphoria” as lockdown was eased.

The government announced in November that shops would be allowed to open until 10pm, only to abandon the plans for the third lockdown. The new extension will apply until June 21, when social distancing restrictions are due to be lifted. Jenrick said: “This will provide a much-needed boost for many businesses — protecting jobs, reducing pressure on public transport and supporting people to continue to visit their high streets safely.”

A Trends Research survey for Business Matters found that seven in ten people would be willing to sacrifice foreign holidays if it meant that the lockdown could be eased as planned this summer.

Pessimism is growing within government about the prospect of foreign holidays as the third wave of coronavirus grips Europe. Ministers will discuss foreign travel and social distancing restrictions at a meeting of the Covid operations committee on Tuesday, but government sources said it was unlikely to include definite dates for holidays.

The survey also suggested that 66 per cent of people would be comfortable with pubs requiring them to produce evidence that they had been vaccinated or had a negative test for coronavirus before they were allowed entry.

Boris Johnson confirmed this week that venues could be allowed to dispense with social distancing rules if they limited entry to those who had had the virus, been vaccinated or could produce evidence of a recent negative test.

Some ministers are concerned that there may be permanent changes to society. Kwasi Kwarteng, the business secretary, told the party forum that there would be “patterns in society that are changed for ever”.

Andrew Goodacre, chief executive of the British Independent Retailers Association, welcomed the change to opening hours and called on shoppers to return to the high street. He said: “Our message is clear — abandon the boring, two-dimensional experience of online shopping, and shop with independent retailers after April 12.”