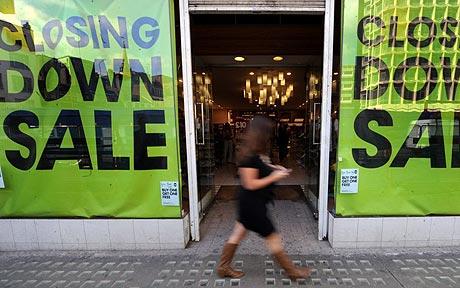 Analysis from PwC and the Local Data Company revealed that chains shut an average of 20 shops a day last year.

The figure increased in the last three months of 2012 as a spate of household names went into administration, reports The BBC.

There was a decline in shops selling products such as computer games, cards and clothes, but a rise in payday loan providers, poundshops and bookmakers.

The figures were based on a survey of 500 town centres. They showed card shops, computer games and clothing outlets hardest hit.

But some businesses were growing – poundshops, payday loan companies, betting shops and convenience stores opened by supermarkets filled a large proportion of the empty units.

High-profile administrations, such as Comet and Jessops, were not the only problem as retailers also shed many stores when leases came up for renewal.

With the rise of online shopping the chains did not need as many stores as they did in the past, a trend that looks set to accelerate this year.

According to the study, more High Street chains fell into insolvency in 2012 than ever before.

BBC business correspondent Emma Simpson said the figures showed just how dramatic the fallout has been on our High Streets.

“The scale of the net figure was something unheard of before the recession,” she added.

“A number of them had failed to deal with their underlying issues by hiding behind light touch restructuring processes, especially Company Voluntary Arrangements. 2013 has seen the downward trend become even worse.”